Globalization and localization: understanding governance and public administration in Asia

It is a common misrepresentation that globalization means international markets will converge to form common paradigms and practices, said Professor Anthony Cheung of 's Department of Public and Social Administration. Countries are more likely to re-interpret global models of economics to reflect trends and beliefs embedded within an individual society, he believes.

"If you look at countries that have undergone a process of public administration reform by embracing Western concepts and ideas, there comes a point when governments indigenize whatever systems they adopt. Even if there is a strong commitment to converge global institutions, such as market economies, we will probably experience divergence and plurality in the end."

In recent years, Professor Cheung argued, political scientists have relied on models borrowed from the Anglo-Saxon world. But, he said, it is important to remember has a strong administration tradition with its own identity, history and culture. This means Asian societies tend to adopt and then adapt Western models for change and reform.

"My main argument is while public sector reforms have become almost a global fashion", he said, "the actual reforms adopted by national and sub-national governments are mostly determined by the domestic agenda that is shaped and driven by local politics, culture and economic conditions."

Lack of will to reform 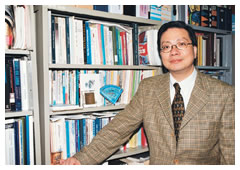 While looking at the history of the civil service, Professor Cheung recognized the lack of will to reform probably stemmed from the apparent compatibility and shared common practices between the British colonial government and traditional Chinese forms of bureaucracy. "In the 1960s and 1970s, the British colonial government was secretive, elitist, and rather bureaucratic.

Problems emerged, though, in the 1980s, when the localization movement became an established part of government policy. Senior Chinese officials in the colonial government believed they were equally qualified and experienced for top posts, explained Professor Cheung, but found their British counterparts occupied the top echelons of power. The result was two ruling elites in competition for power, he said.

Political and economic triggers for reform 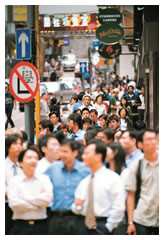 Subsequent problems triggering public administration reform in Hong Kong can be classified into two categories, continued Professor Cheung. The first is political. "These days, Hong Kong people are better informed and more active than the past. They want a more responsive government, one that is more accountable and more aware of the changing political environment. In colonial times, the government was sacrosanct and had a very different relationship with the community and the media than it has now. Since implementation of the Basic Law after the 1997 handover, the political climate has definitely changed."

The second area of concern is the economy. Because the Hong Kong economy underwent a period of rapid expansion until 1997, argued Professor Cheung, there was little motivation for reform then. In Europe, however, public administration reform took place because Western European economies suffered a series of crises. There was a need for change in Hong Kong. What reform that took place was largely to emulate what was happening elsewhere in the world, rather than out of necessity. "And once the Hong Kong economy began to weaken after the 1997 Asian economic meltdown, public sentiment changed. Now people want value for money and reform is unavoidable."

Looking at the potential impact of Chief Executive Mr Tung Chee-hwa's modifications to government, the ministerial-style government that was implemented on 1 July 2002, Professor Cheung suggested the most visible change concerns the possibility that civil servants' power-base will be reduced. "Civil servants previously formulated and administered policy, but, with the introduction of a cohort of principal officials by political appointments, top civil servants will no longer possess policy-making powers."

However, Professor Cheung was quick to add this argument is only theoretical. In practice, he said, the top people in the civil service are likely to continue as politically appointed principal officials, with existing secretaries filling most of the positions. The reason for continuity is outsiders might not be interested in working in government. "Private sector CEOs might not be attracted to the salary, the media attention, the lack of privacy but constant public criticism, whereas former senior civil servants, with their knowledge of the workings of government, are more likely to want the job."

Professor Cheung is optimistic that the new Principal Officials Accountability System will benefit in the long term. "Over the past few years, people have grown jaded with the institutions of power and institutions that are meant to hold the executive branch of the government on check , for example, the Legislative Council (Legco)," he said. "As Mr Tung's popularity ratings have fallen, there has not been a subsequent rise in public support for the opposition parties. New faces are needed."

He suggested people such as the increasingly popular Financial Secretary, Mr Antony Leung, can breathe fresh air into government, even if they are not elected by popular vote. These principal officials, he added, will have considerable resources; an important factor since with resources the new principal officials might be able to make a difference.

However, Professor Cheung partly agrees with recent comments by Mr Martin Lee Chu-ming, Chairman of the Democratic Party, that "the simple truth is there cannot be genuine accountability in without democracy." Mr Tung is not accountable to the people because he cannot be removed by public sentiment, Professor Cheung said. But the real problem is not whether Mr Tung has too much power, but that the Legco doesn't have enough.

"Legco cannot table bills that change the structure of government or that affect government finance. In fact, Legco members have to get permission from the Chief Executive to table even bills relating to any government policy. They can move motions but they cannot formulate policy. This is the major problem, and it is not under any kind of review at the moment because it is enshrined in the Basic Law and cannot be changed."

Adapting to a new era of governance

In light of the reforms to government in , CityU's Department of Public and Social Administration has had to adapt to the new era of governance. One major change is the renaming of the Research Centre for Comparative Public Management and Social Policy, a research body under the leadership of Dr Julia Tao, and co-directed by Professor Cheung and Professor Ian Holliday, within the Faculty of Humanities and Social Sciences. "We've recently renamed it Governance in Asia Research Centre. With this new name we want to capture a more focused research agenda and set out more clearly what the Centre is trying to do. We're still looking at public management and social policy but we want an agenda that is more relevant and sensitive to the Asian context."

Tied in with this research agenda are plans to host a major conference entitled "Governance in Asia: Culture, Ethics, Institutional Reform and Policy Change" in December 2002. The conference will bring together scholars from various disciplines within Asia to establish an agenda for future research and reform directions. The aim of the conference is to find out what is common among Asian countries and what distinguishes Asian countries.

Previous collaboration and exchanges between scholars working in the field of public administration reform in Asia have served to illustrate the diversity of experience within the region. For example, the Asian Forum, an initiative set up by Professor Cheung to look at comparative studies of commonality and divergence in Hong Kong, Singapore, South Korea and Japan, revealed the extent to which models for reform are influenced by politics and the economy.

"The general impression is reforms in each of the countries are influenced by politics," said Professor Cheung, "but these East Asian countries are very different because each country has diverse political and social factors to consider." It is the same in Europe, he said,where France, Germany and Britain maintain different approaches to reform. Similarly, in Asia, there is no one model but a plurality of models in operation. "We hope that through our research we can add to the global discourse on governance and public administration reform. Asia doesn't just have to learn from others. Others can learn from us and our experiences."