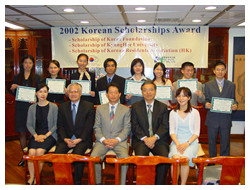 Eight CityU students who excelled in Korean language studies were awarded scholarships and study grants at the first Korean Scholarships Presentation Ceremony organized by the Division of Language Studies on 10 June.

This year, eight students were offered a chance to attend a month-long intensive Korean language programme at Kyung Hee University in Korea. Three received full scholarships while five were awarded study grants in an intensive language programme. The scholarships were offered by the Korea Foundation, Kyung Hee University and the Korean Residents Association (Hong Kong). 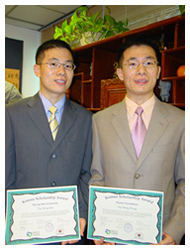 The winners include twin brothers Yip Shing-hong and Yip Shing-hei. "Our interest in the Korean world was first aroused by a series of television programmes on Korean news," said Yip Shing-hong. "We were lucky to get to know some Korean pen pals and have visited the country a number of times. That's how we learned more about Korean language and culture." 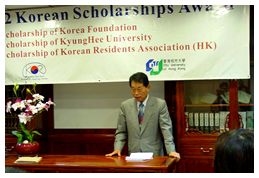 There are currently three Korean courses, from beginners to advanced level, offered by the Division. The courses provide students with practical skills and knowledge in Korean phonology, pronunciation, grammatical structure, vocabulary and conversation skills. A variety of idiomatic and colloquial expressions used by Korean native speakers are introduced through authentic learning materials such as Korean films, videos, and songs.

Roughly 500 students have enrolled in the Korean courses since they were introduced in Spring 2001.