A pioneer in nanotechnology and winner of the US National Medal of Science delivered a lecture on materials science research at the nanoscale in CityU's Distinguished Lecture Series on 29 May. 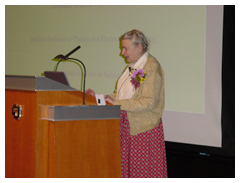 , Institute Professor of Physics and Electrical Engineering at the Massachusetts Institute of Technology (MIT), spoke about how materials science research has reached a new phase, where the structure and properties of materials can be investigated, characterized and controlled at the nanoscale. One- dimensional nanowires and nanotubes exhibit unusual physical properties and have attracted interest because of their potential for application in novel electronic, optical, magnetic and thermoelectric devices.

In her lecture, "New Directions in Nanotechnology", Professor Dresselhaus said it is now possible to make silicon nanowires one nanometre wide (a nanometre is one thousand-millionth of a metre). "It's amazing that man can make such small objects in such an original way." Her lecture included examples of research accomplishments and opportunities at the nanoscale and the new interdisciplinary research programmes in the field of nanoscience and nanotechnology worldwide.

Professor Dresselhaus is the former Director of the Office of Science at the US Department of Energy, a former President of the American Physical Society, Fellow of the National Academy of Engineering, the American Academy of Arts and Sciences, the American Physical Society and the Brazilian Academy of Science, and a holder of 17 honorary doctorates. A leader in promoting opportunities for women in science and engineering, she received a Carnegie Foundation Grant in 1973 to encourage women to study in traditionally male dominated fields.

In addition to her lecture, Professor Dresselhaus is working with CityU's Centre of Super-Diamond and Advanced Films (COSDAF), an international leader in nanoscience research, to strengthen the collaboration between her MIT research group and the CityU COSDAF team led by Professor S T Lee, Director of COSDAF and Chair Professor in the Department of Physics and Materials Science.