TechExpo: a showcase for innovative IT 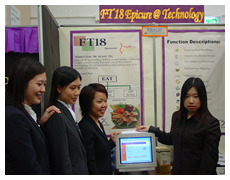 Their development of a Web-based catering system has earned a team of students from the Division of Computer Studies (DCO) the championship title in the Division's Project of the Year Competition and Exhibition at TechExpo 2002.

Developed by Computer Studies students Nancy Choi, Manki Ip, Phoebe Li and Stephanie to simplify the daily chores at a western restaurant, Epicure@Technology (EAT), was just one of the innovations on offer at CityU's TechExpo 2002.

"These projects have clearly demonstrated their technical IT skills in system design and development, as well as the collaboration and communication amongst team members," said Mr Alan Wong, Director of Information Technology Services, HKSAR, at the opening ceremony held on 26 April. "This is commendable because the development of innovative e-business applications and solutions ties in well with the Government's IT objectives for Hong Kong." 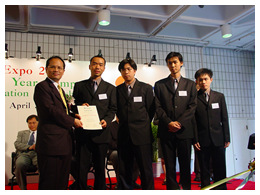 The two-day expo showcased a total of 53 projects undertaken by graduating students of the Higher Diploma in Computer Studies. Many projects were based on real cases provided by sponsoring organizations, such as PCCW, Sing Hin Catering Group, and the Hong Kong Association of the Deaf. One of the sponsors, Ruttonjee & Tang Shiu Kin Hospitals, has decided to adopt the "Automated Information & Management System for Pulmonary Rehabilitation" developed for its
Occupational Rehabilitation Department by CityU students.

The Division's Project of the Year Competition and Exhibition celebrates its 10th anniversary this year. The panel of judges, made up of IT professionals, executives and academics, were impressed by the students' projects. Panel Chairman Mr Raymond Yu particularly praised the effort made by the Division and the organizing committee to ensure that the choice of projects related to market demands.