A debating victory for CityU 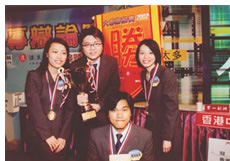 The CityU Chinese debating team won the championship in this year's Inter-collegiate Debate Competitions among eight post-secondary institutions in Hong Kong . With an unprecedented landslide victory of 5-0 against the Chinese University of Hong Kong in the final contest on 7 April, our team walked away in triumph. CityU Social Science Year 3 student Mr Li Kin-on, a member of our debating team, was also awarded the title of Best Speaker in the event. One of the panel judges, Mrs Fanny Law, Secretary for Education and Manpower, commended our team for their Oeloquence, language proficiency and poise".

Miss RamboYip Wing-sze, leader of the CityU debating team, attributed their success to both the hard efforts of all the team members and the mentorship of Mr Chan Kwok-keung, an alumni and former debating team member. Since graduating in 1994, Mr Chan has been helping the debating team as an advisor, working together with the team on data research and preparation for mock debates. "We owe our success to the team's thorough research on the topics, which enabled them to deliver an outstanding performance on stage," said Mr Chan. Team members are usually given five days to prepare before each contest, during which they are busy gathering information, discussing the issue and conducting mock debates. 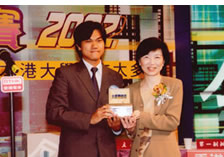 "become an outstanding debater, you need to be strongly motivated to perform in public," said Mr Li Kin-on, who has won the title of the best speaker twice in this year's round of inter-collegiate debating contests. He pointed out that each debater in a team has a specific role. To clearly define the motion in the beginning, the first speaker should ideally be gifted with a pleasant voice and an acute logical mind. The second and third speakers should be more aggressive and respond quickly to attack their opponents" weak points. The final speaker should have the ability to comprehensively summarize the points previously presented.

How do they overcome the problem of stage fright? "When I see the supportive and encouraging expression of my team members sitting in the audience," said Miss Michelle Cheng, one of the debaters, "I forget about being nervous on stage." Another debater, Mr Hugh Cheung said, "Once on stage, you have to treat it as a talk show and do your best to give a good performance."

The CityU Chinese debating team consists of 30 members. New blood is recruited each year during the registration of first year students. The team received 130 applications this year. After screening and interviewing by existing team members, only about 10 applicants were accepted. After the inter-collegiate competitions, our debating team will represent Hong Kong in a regional contest against teams from Guangzhou and Macau , at the invitation of Radio Television Hong Kong.