Exchanges on the stage

CityU students joined their counterparts at Zhejiang University to present a cultural performance on 18 April at the Wei Hing Theatre, bringing the concept of student exchange to new heights. 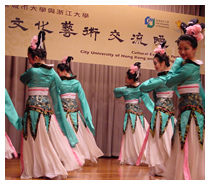 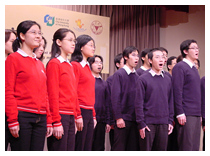 The audience enjoyed the performances and was especially impressed with the martial arts performance of two Zhejiang students. They were also appreciative of the Putonghua recitation of "Nian Nu Jiao" and "Reminiscing Chibi", by students in the Division of Language Studies. A song, "A Better Tomorrow", sung by students of both universities, marked the closing of the show.

"While there has been increased exchange between CityU and mainland universities in recent years, these are usually restricted to academic exchange and cooperation between faculties -- exchanges between students are very few," said Professor Y S Wong, Vice-President (Institutional Advancement) in his welcoming address. "The joint cultural performance is an unprecedented and very rare opportunity. I hope we can have more activities of this kind in the future and that CityU students will have a chance to visit and perform at Zhejiang at Hangzhou." 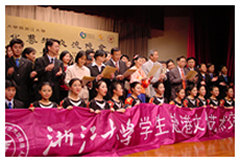 Professor Tong Shao-su, Vice-Secretary of the Party Committee of Zhejiang University, concurred: "We also realize that exchanges between students are as important as those between academics," she said. "We hope that students can act as ambassadors to facilitate exchanges with universities in Hong Kong during this visit and at the same time gives them a chance to enrich their learning experiences." During their seven-day visit to Hong Kong, the Zhejiang students performed at six universities in Hong Kong. CityU was their last stop.

"Though it is our last stop, it is also the most important to us as we want to give it a satisfactorily round off," said Chen Jia of Zhejiang University, one of the masters of ceremonies. "The visit is a very rewarding experience," she said. "It is not only our first exchange in such a large scale, but also a rare chance to have exchanges on a cultural level. I feel that CityU is very keen in promoting cultural activities and it must have a very good foundation or it cannot stage such a variety of programmes for the show." 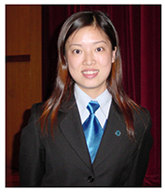 Du Juan, who is also from Zhejiang, treasured the chance to make new friends and learn about different cultures. "CityU's ambiance is very close to ours," she said.

The talent and earnest attitude of the Zhejiang students impressed their CityU counterparts. "They are enthusiastic, well-organized and take everything at heart," said Cheung Yuk-man, an MPhil student in the Department of Chinese, Translation and Linguistics, who helped receive the Zhejiang visitors.

"Their performance was terrific," said Katrina Lam, a first-year student from the Marketing Department, who performed at the Indian dance.