A pluralist's view of cross-cultural understanding

Was misunderstanding inevitable when Matteo Ricci went to as a Jesuit missionary in the late sixteenth century? Is cross-cultural understanding possible? Or do we, because of our individual conceptual frameworks, distort meaning as we interpret and translate ideas from cultures other than our own? Are competing paradigms incommensurable?

These were a few of the testing questions Professor Sir Geoffrey Lloyd raised at the inaugural conference of the Centre for Cross-Cultural Studies, "Matteo Ricci and After: Four Centuries of Cultural Interactions between China and the West", held on 12-15 October 2001 at City University.

Although Professor Lloyd's keynote address was by his own admission abstract and philosophical, the central question was clear: could Ricci have wielded greater understanding of Chinese scientific and philosophical ideas during his twenty-five years in ? 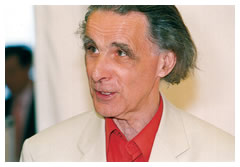 According to Professor Lloyd, Ricci ignored aspects of his own European heritage and downgraded Chinese ideas in his efforts to convert souls to Christianity. He argued that had Ricci acknowledged the prevailing intellectual pluralism within previous European cultural traditions and had he appreciated the complexity and diversity of Chinese culture, he could have acted as a better mediator between the two civilizations.

Speaking to Bulletin before his talk, Professor Lloyd explained that pluralism is central to his own fundamental ideas about the world. In philosophy, pluralism is the belief that no single set of principles can explain the heterogeneity of life; in sociological terms, it is a state in which diverse cultures co-exist in an atmosphere of tolerance. Cross-cultural understanding, Professor Lloyd argued, occurs more efficiently in such a pluralistic world, an assertion with which few liberal-minded thinkers would disagree.

"One of the things that can contribute to the development of ideas is pluralism. If you have a society that inhibits pluralism, it is less likely to expand and develop. By studying other cultures you see how ideas developed and how the individual breaks free. One of the points of the exercise is to become self-critical and to understand other people better."

Understandably, one of the features of Professor Lloyd's academic pursuits is a healthy disregard for simplification and generalization. Sweeping statements only succeed in cutting corners and distorting meaning. "There are masses of variety in early Chinese philosophy and one shouldn't try to generalize. In my book Adversaries and Authority, I lay down certain methodological principles that warn against this because one should not attempt vast generalizations about the whole of Greek civilization and the whole of Chinese civilization. Instead you have to see the plurality on both sides and look at the factors that contribute to the way in which the subjects are defined."

Professor Lloyd's work is difficult to classify because his academic interests defy traditional, single-discipline categorization. He has lectured on, and written about, ancient Greek and Chinese philosophy, the history of science, English, education, modern languages, anthropology, Sinology and history. "I am dead against labeling people too narrowly because it doesn't suit people like me." He describes himself as an ancient anthropologist.

As an undergraduate studying Greek at in the 1950s, Sir Geoffrey developed interests in Greek philosophy, sciences, medicine and mathematics. His doctoral thesis focused on modes of thought in ancient and drew on a great deal of Chinese material. He explained that at scholarship is an interrelated discipline with academics working within a wide range of disciplines, a highly pluralist approach to learning.

In his conference address, Professor Lloyd argued that while there were chasmic differences, Greco-Roman and Chinese civilizations were not incommensurable. He claimed that plurality existed on both sides, and had Ricci been more sensitive to this he might have been more appreciative of Chinese culture and learning. 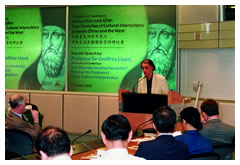 His second argument against the incommensurability of competing paradigms was more empirical. In practice, he pointed out, no language exists that has not been interpreted in some way. There are many problematic languages but no ethnographer has ever returned from a field trip to say communication was impossible. Some part of the text or speech is always understood.

This argument was further developed with reference to the issue of radical indeterminacy of translation. Professor Lloyd pointed out that translation from one Indo-European language to another raises the same kind of linguistic challenges-the use of transliteration and neologisms-as translating an Indo-European language to Chinese. When Chinese translators worked on Aristotle's Categories in the 1600s, they used a Latin translation of the original Greek. In so doing, the translation difficulties would have been no greater in substance than those experienced by the Latin translators working on the original Greek. What's more, the Chinese encountered similar linguistic problems decoding early Buddhist texts from the original Sanskrit.

Pluralism inherent between East and West

Having rejected the concept of incommensurability, Professor Lloyd went on to claim that Ricci ignored the inherent pluralism within his own cultural background. Just as there were differences between ancient Greek and Chinese philosophies, there were also significant differences within Greek and Chinese thought. For example, Aristotle thought the earth spherical and the world spatially finite but temporally eternal; Huainanzi thought the earth was flat under a round sky.

"They (Aristotle and Huainanzi) seem to inhabit different worlds but we cannot label one the Ancient Greek view and the other the ancient Chinese because neither represents the views of all their contemporaries," he said.

For instance, Aristotle, Democritus and Theophrastus maintained radically different views on atomism and element theory, worldviews as divergent and opposed as those between Aristotle and Huainanzi. To generalize about ancient Greek philosophy would mean glossing over some of the more complex and intricate debates.

"Ricci was less intent on understanding the Chinese than converting them. He knew he had to water down aspects of Christian thought to make them more acceptable," Professor Lloyd argued. "He was in an ideal position to reflect on the contribution of Chinese thought as an alternative to European thought, a contribution that has taken hundreds of years to begin to be appreciated in the West."

Professor Lloyd ended his address by emphasizing that a great deal of Chinese philosophy, such as acupuncture, the Yijiang (The Book of Change) and feng shui, has slowly filtered into Western consciousness but that the journey had taken almost four hundred years. Early contact between the Chinese and the Europeans could have accelerated cross-cultural exchange had those involved recognized the inherent pluralism on both sides and had conversion not been the primary aim of the first Europeans in .