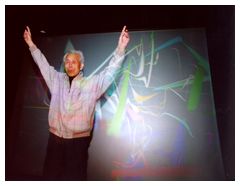 One of China's most renowned painters, Wu Guanzhong, turned his body into a brush and composed a 3-D drawing using CityU's innovative Body-Brush technology on campus on 13 March.

"It is very good, very beautiful," said Mr Wu. He described the technology, which transforms body movements into real-time 3-D paintings, as "the scenery of life". Mr Wu also hailed the Body-Brush as a breakthrough artistic tool because of the way it can capture the character of a person.

Mr Wu believes that new technologies such as the Body-Brush can spawn new visions and facilitate the development of art beyond the limits set by established conventions. 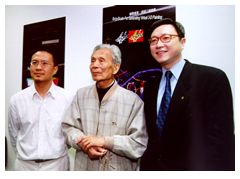 creating a human-computer interface in which a person composes a real-time 3-D painting by simply performing body movements on a virtual 3-D canvas.

Two infra-red sensitive cameras and an array of infrared lamps captures the artist's body movements while the software analyzes these actions. What is generated is a mixture of colour

strokes and patches that float in 3-D space in synchronization with the artist's movement. Body gestures affect the size of the brushstrokes while body acceleration and speed control colour saturation and value respectively.

Mr Wu visited Hong Kong to host the opening of an exhibition of his work at the Hong Kong Museum of Art from 15 March to 12 May. His demonstration of the Body-Brush at CityU will be broadcast during the exhibition.

Centre for Innovative Applications of Internet and Multimedia Technologies