A CityU publication, Chinese Civilisation: A Source Book, has been named one of the Ten Recommended Books for the year by Radio Television Hong Kong (RTHK) and the Leisure and Cultural Services Department. 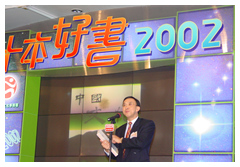 The CityU publication is the pick of Mr Vincent Cheng, Vice-Chairman and Chief Executive Officer of Hang Seng Bank. " The book is a concise and comprehensive summary of the cultural history and development of China spanning a few thousand years," said Mr Cheng. "I recommend it to anyone interested in the cultural legacy of China. I myself have benefited much from it." Mr Cheng spoke at the opening ceremony of the "2002 Ten Recommended Books" event, which took place on 8 February at the Hong Kong Central Library.

A collection of correspondence between CCIV visiting professor Liu Zai Fu and his daughter was also among the top ten. Professor Liu's book was chosen by renowned writer, Mr Louis Cha.