CityU scientists have developed an optical fibre that is expected to revolutionize wideband telecommunications by enhancing the quality and stability of high bandwidth data transmission. 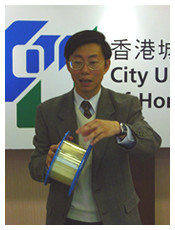 The breakthrough, featuring a new ultra-large-core single-mode fibre, was the result of a research project led by Dr Kin Chiang, Chair Professor of the Department of Electronic Engineering. The novel fibre can be applied to ultra wideband telecommunications, allowing enhanced broadband Internet data transfer as well as improved long-distance telecommunications and TV signal transmissions.

"The development could help to lower the cost of ultra wideband telecommunications internationally," Professor Chiang said. An overseas collaborator is currently working with Professor Chiang to bring the new fibre to market. 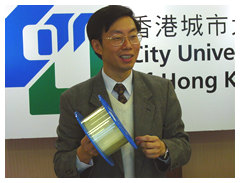 Professor Chiang, who invented the revolutionary fibreoptic design with his research fellow, Dr Vipur Rastogi, was recently elected a Fellow of the Optical Society of America in recognition of his extensive contributions to fibre and integrated optics, particularly the theory, simulation and characterization of optical fibres and wavelengths.

In 1999, Professor Chiang was awarded the Croucher Senior Research Fellowship. He holds two patents and has published over 200 papers in international journals and conference proceedings, as well as several book chapters.