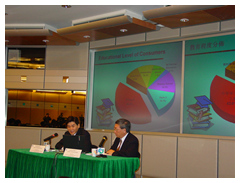 Hong Kong consumers were less happy this year, with the Hong Kong Consumer Satisfaction Index shrinking to 66 in 2001, a 2.2 % drop over last year, CityU's Department of Management Sciences announced this week.The survey was based on more than 10,000 interviews conducted in July and August. Among the six categories surveyed, consumers were least satisfied with Housing and Related Items, whereas the highest-ranked category was Clothing & Personal Care, followed by Transport, and Food and Drink.

As in the previous year, the satisfaction index found that consumers were most satisfied with music CDs. Video and sound equipment reported the biggest gains in consumer satisfaction, while the general services sector of local banks saw the largest deterioration. 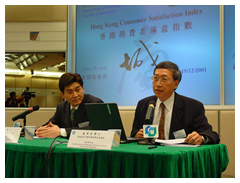 Commenting on the 2.2 % decline, Dr H P Lo, Team Member of the Research Group and Associate Professor of the Department of Management Sciences, believed that it could be viewed as a sign of the deterioration of 's standard of living. Since 1998, the Department has used the annual survey to gauge the satisfaction level towards more than 60 commodities and services in . It can serve as a yardstick for suppliers to measure and improve the quality of their products.

With an increasing number of consumers going north to spend money, the research team this year added a special twist to the survey, studying Hong Kongers' consumer behaviour in Shenzhen. Of 6,486 adults randomly selected from the 2001 HKCSI survey, 1,838 were identified as qualified respondents. Among them, nearly 90% went to Shenzhen more than once per year, 45.8% of who went there at least once per month. The survey also showed that Hong Kongers spent an average of HK$788.6 every time they traveled to Shenzhen.

Despite the fact that locals spent much on shopping and entertainment in Shenzhen, they are not satisfied with the products/services there, the HKCSI found. The results also indicate that Shopping in Shenzhen and Entertainment in Shenzhen were the second and fifth worst performers, with scores of 57.8 and 61.3, respectively. The researchers added that consumer loyalty to Shenzhen was rather low. Provided that retailers and service improve their products services at competitive prices, consumers would turn back to .