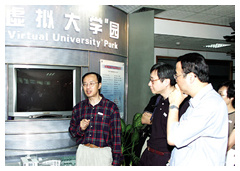 Following the establishment of a research base at the Shenzhen Virtual University Park (SVUP), CityU has launched another such centre in Zhuhai's Southern Software Park at the end of this year.

The University will continue to explore new footholds across the border as opportunities arise, said Mr H Y Wong, Director of the Industrial and Business Development Office (IBDO). Lower running costs, top research talent, and proximity to the mainland market are just some of the many advantages offered by a mainland research office, he explained.

this year resulted in more than 20 proposals. After reviews by the Working Group on Applied R&D, chaired by Professor W F Fong, Associate Vice-President (Research), 10 projects were selected for funding. Among these funded proposals, four were picked for incubation at two research centres in the SVUP. The remaining six, which focus on IT, were chosen for the Zhuhai centre (see chart).

The two centres in the SVUP, Biotech & Health Centre and Industrial Technologies Centre, headed by Professor W F Fong (BCH) and Dr Albert Cheung (FLC), respectively, cover a total area of 7,000 square feet. The IT centre in Zhuhai, headed by Professor Hon Yan (IT), occupies approximately the same area as the two Shenzhen centres combined. A representative office in the SVUP, headed by Mr H Y Wong and managed by a mainland officer, will serve as the liaison centre for CityU's teaching, research and promotion activities -- such as academic exchange and conference organization -- in . 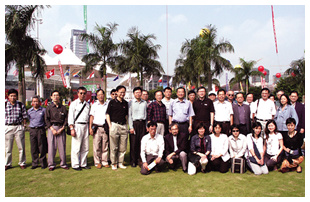 CityU has earmarked HK$50 million for business incubation and applied research development in . Projects selected for incubation, though funded initially by the University, are expected to eventually become self-financing. IBDO will invite a second round of proposals to be considered for incubation at the two Pearl River Delta applied R&D centres early next year.