Hitching a ride on the PRD Express 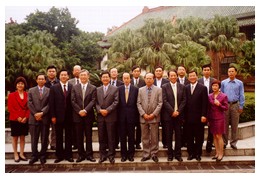 The Pearl River Delta (PRD) region has been called the fastest-growing economic powerhouse in Asia, and CityU is quickly linking itself with the area's good fortunes. Indeed, to explore the possibility of enhancing its ties with the region, an 11-member CityU delegation visited five Pearl River Delta cities last month.

"Hong Kong and the Pearl River Delta have their own respective strengths. They should be able to complement each other in many aspects," said President H K Chang, who led the delegation. "Collaboration between the two will definitely be beneficial to the development of both and China as a whole." 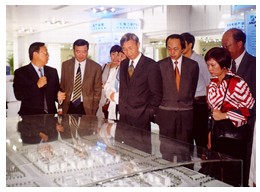 The delegation set off from Hong Kong on 5 November for a four-day visit to the region. Following a horseshoe-shaped route, they toured five fast developing cities-Shenzhen, Dongguan, Guangzhou, Zhongshan, and Zhuhai, calling on 14 government, academic, scientific research, and corporate units.

The delegation was excited and encouraged by the trip, hectic though it had been. Some observed that the development of the PRD has been extremely rapid, possibly even more so than that of Hong Kong. Vice-President for Business and Finance, Mr James Ng, said: "The PRD seems to be more capable than Hong Kong of adjusting to the changes brought about by globalization. Their leaders are also very knowledgeable of what is demanded of them by the world and the times, and they are people of action. A university can be built very quickly, unlike in Hong Kong where talks alone can drag on for years."

The delegates felt the cooperative spirit between the PRD and Hong Kong has grown dramatically because of the trip. Collaborative projects, such as academic exchange, research cooperation, and the running of academic programmes in the PRD, also seemed a step closer to materialization.

For Professor P S Chung, Vice-President for Research, the trip vindicated his own beliefs about the significance of the PRD region. "This trip reinforced my belief that our policy to set up beach-heads in Shenzhen and Zhuhai is the right one," he said.