A recent addition to the CityU scene, the Southeast Asia Research Centre (SEARC) is fast gaining a reputation as a unique research institution. Inaugurated in February 2001, the Centre has spent the past 10 months hiring new staff-one senior research fellow is already on board and there are two others on their way-receiving and funding research applications, putting a series of working papers on its website and offering a range of seminars.

SEARC's mission is to develop into a world-class research centre for the study of Southeast Asia. The Centre focuses on Southeast Asia as a region where societies, cultures and nations are being actively remade within the context of multiple globalizing forces, while at the same time being sensitive to the historical processes that underlie current changes.

"No one else in Hong Kong is offering the range of expertise and experience or the research focus we have," explained Professor Kevin Hewison , SEARC Director. "We provide interpretations grounded in theoretical approaches to development and to social and political change. Of course, there are news organizations or researchers attached to finance houses who work on contemporary Southeast Asia, but we are doing something different. SEARC is undertaking innovative and in-depth academic research."

In fact, with its broad Asian studies tradition and links to political science, anthropology and sociology, the Centre may well be unique worldwide. "If you compare us with other Southeast Asian studies centres in the region, and even if you go as far as Australia, North America or Europe, we are one of the few centres that has a distinct research focus," Professor Hewison said. "I can't think of another Southeast Asian research centre in the world that does the same thing." 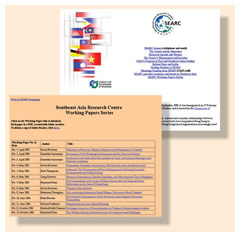 Most of these centres tend to have a very broad focus, extending their purview to cover anyone working on any aspect of Southeast Asia. SEARC, on the other hand, looks at particular features of Southeast Asian development. "We decided right from the start that our research agenda would focus on certain aspects and, even though it's fairly broad, it does mean that there are some things we don't include in our programme."

The fact that SEARC is purely a research centre is also unusual, Professor Hewison said. "There are few Southeast Asian institutes in the region that don't have teaching attached. It gives us a different focus. I hope that this will mean that we can be successful in developing a distinctive and vigorous research programme."

The seminars offered by the Centre to date have been very successful, with presentations from a wide range of renowned scholars, including SEARC's three visiting professors from Murdoch University in Australia, the University of California, Berkeley, and Xiamen University in China. One seminar was held jointly with the Centre for Asian Studies at the University of Hong Kong and another with CityU's Centre for Comparative Public Management and Social Policy. Other presentations have been held in conjunction with the Hong Kong Forum. And, Professor Hewison is happy to note, the seminars and forums are attracting people from NGOs, the business community and the general public, in addition to students and academics.

SEARC's Working Paper Series website has proved to be popular since it was set up in April. "We're very pleased, considering we haven't advertised," Professor Hewison said. The papers include one given as the keynote address by Dr Michael Vatikiotis , Editor of the Far Eastern Economic Review, to a one-day symposium held in June this year. The symposium-Contemporary Southeast Asia: Crisis, Conflict and Change-was organized jointly with the Department of Applied Social Studies to study crisis and change in Indonesia, Malaysia and Thailand. 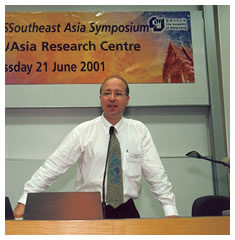 Other speakers were Professor Frederick Deyo, State University of New York, Binghampton; Professor Richard Robison, Murdoch University; Dr Duncan McCargo, Leeds University; Dr Khoo Boo Teik, Universiti Sains Malaysia; Dr Vedi Renandi Hadiz, National University of Singapore; and Professor Hewison himself. "The symposium was very successful and brought together people from most of the local universities, local companies and the public and raised the profile of research on Southeast Asia. There's definitely a growing interest in the region and we'll look at holding some more of these," he said.

The second edition of The Political Economy of South-East Asia: Conflicts, Crises and Change, edited by Garry Rodan, Kevin Hewison and Richard Robison, has recently been published. Many of the contributors to the book have been visitors to SEARC, either as visiting professors or guest lecturers.

As far as research proposals go, funding has already been approved for seven proposals from staff in the Faculty of Humanities and Social Sciences, Professor Hewison said. "They're an interesting range of projects, including research into labour relations; atavistic movements in Indonesia, Thailand and the Philippines; a comparison of the Cao Dai religious movement in Vietnam and Chinese religious movements; political change in Thailand, Indonesia and Malaysia; and ethnicity and inequality in Malaysia."

But do Hong Kong people recognize their relationship with Southeast Asia? In the past, perhaps not, but Professor Hewison believes attitudes are changing, not least because of the recent economic crisis and impacts of globalization. If CityU students are anything to judge by, there is evidence of a change of outlook as more students choose to include Southeast Asia in their studies. "With this enhanced interest and the Centre now up and running, we feel that we can further promote Southeast Asian studies among out students and more widely in Hong Kong."