Rationalizing the irrational in idol worship and role models

Think of your favourite idols. Would they include Magic Johnson, Zhou Enlai, or Faye Wong by any chance? Now think of the most creative Chinese minds, historical or modern. Would Confucius, Sun Yat-sen, or I M Pei appear on your list? To learn more about adolescent idol worship in different Chinese cities and young people's perceptions of the most creative figures, Dr Yue Xiaodong of the Department of Applied Social Studies conducted two lines of research over the last few years. Under scrutiny in both were youth in Hong Kong and other Chinese cities. 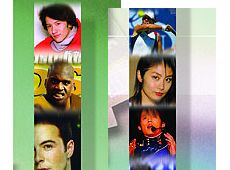 "Idol worship is a subject I have always been interested in since my days as a graduate student at Harvard University. It is also an important social phenomenon, one which has largely been overlooked by psychologists, especially in Chinese societies, "said Dr Yue. In his studies, Dr Yue sought to identify the essential characteristics of adolescent idol worship, and to compare its patterns in Hong Kong and mainland China. The hypothesis underlying the study is that idol worship differs from role model learning: the former is characterized by projections of idealism, romanticism, and absolutism (IRA) on the favoured idols, and the latter, by those of realism, rationalism, and relativism (RRR). In idol worship, the idol is placed on a pedestal and an excessive and unreciprocated attachment is formed, whereas in role-model learning, attention falls more on the model's attributes, which may lead to behavioural change. An idol, according to Dr Yue, is actually a role model mystified.

In one study, questionnaires designed to measure criteria for choosing idols and models were distributed to over 800 randomly selected secondary school and university students in Hong Kong and Nanjing. The criteria were based on Dr Yue's hypothetical model, with detailed attributes attached to each item. For example, the attribute set for "idealism" included "very talented" and "attractive" while that for "realism" included "mundane" and "ordinary looking" The respondents were also asked to nominate up to three figures each as their favourite idols, and another three, as their models.

Comparing Hong Kong and Nanjing youth
The results supported Dr Yue's paradigm--IRA were found to be more important in the selection of idols, and RRR, in that of role models. They also demonstrated what Dr Yue describes as the tri-star phenomenon: pop singers, movie stars, and sports stars figured most prominently in the selection of idols by the young people of both places.

Another interesting line of findings was that adolescent idol worship in Hong Kong is more narrowly constructed than on the mainland. For instance, approximately 80% to 90% of the idols picked by Hong Kong's secondary school students were tri-stars, and 60% of those by university students. The corresponding figures for mainland students were 60% and 20%. Mainland students also showed greater diversity in their selection of idols and models, naming famous politicians, generals, writers, and artists besides tri-stars, Dr Yue said.

He attributed the overwhelming selection of the tri-stars partly to the over-idealization of attachment figures in any sort of idolatry, and partly to the transitional role that romantic attachment serves in an adolescent's individuation from parental love to the romantic love of young adulthood. "Remote intimacy is all the young people are after," Dr Yue said.

As to the greater diversity in the mainland students?choice of idols, Dr Yue attributes it to the differences in youth culture between Hong Kong and the mainland, Dr Yue said. "In their worship of idols, youth in Hong Kong seem to be driven by a consumerist need marked by vainglory and illusory romance. Conversely, Nanjing youth seem more likely to be motivated by a developmental need for self-determination and inspiration," he said.

From star idol to role model 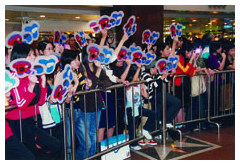 Dr Yue's attitude to idolatry can be summed up by his slogan: "Bid farewell to star idols; treat them as role models? He is of the view that teachers, parents and policy-makers should not view youthful idolatrous culture with contempt but as an unavoidable part of growing up. They should take a proactive approach by encouraging young people to "rationalize the irrational in idolatry by focusing on the attributes of an idol that make him/her successful".

Comparing the middle-aged in Hong Kong and Changsha
Adolescent worship of stars in the entertainment and sports industries should come as no surprise to most. Yet have Chinese young people over the years been steadfast or fickle in their taste in idols? In another study, Dr Yue attempted to identify a generation gap in adolescent idol worship, running samples on a group of middle-aged people in Hong Kong and Changsha. He discovered that while the Hong Kong locals used to admire their teachers, parents, or good friends, their counterparts in Changsha admired famous politicians, scientists, and public role models. "While admiration of one's teachers and parents in Hong Kong is tied closely to traditional Chinese cultural values of respecting the elderly and the educated, admiration of heroes and public role models in Changsha is a result of politicized idolatry--young people would only worship figures who had been screened and marketed by the government," Dr Yue said. The middle-aged from both cities believed that pop, film and sports stars figured most prominently among current adolescent idols in both Hong Kong and the mainland. "Both parent-teacher and hero-role-model worship have been replaced by tri-star worship. Idol worship has become unified through commercialization," he said.

Perceptions of creativity by young Chinese in four cities
In another series of studies, Dr Yue turned from idolatry to another related topic: perceptions of creative people in Chinese societies. In one of Dr Yue's studies, over 400 randomly selected undergraduates from Beijing, Guangzhou, Hong Kong and Taipei were asked to nominate up to three most historical and modern creative figures in China respectively. "The most remarkable finding of this study was that the students shared more than they differed, despite socio-cultural differences, in their perceptions of creative figures. We're birds of a feather," said Dr Yue.

Respondents from all four places overwhelmingly considered politicians and scientists to be the best representatives of creativity, with the two categories accounting for over 80% of all nominees in both the historical and modern categories. Qin Shihuang (politician), Zhang Heng (scientist), and ZhuGe Liang (politician) top the list in the historical category, and Deng Xiaoping, Mao Zedong, and Sun Yat-sen, in the modern.

Surprisingly, figures in the creative arts accounted for less than 2% of all nominees. Of the four samples, Hong Kong students showed the greatest diversity in their perceptions of creativity, while Taiwan ranked somewhere in the middle. "It's intriguing," said Dr Yue. "The students were not asked to name someone they admired, but someone creative, so why politicians?" He attributes this to the "meritorious evaluation bias"--that is, when Chinese evaluate the merits of a creative person, they give far more weight to social status, fame, and contribution to society than innovativeness.

By contrast, studies have shown that US undergraduates hold a broader perspective of creativity, being more likely to nominate artists, musicians, writers, as well as scientists as creative figures. Rarely do politicians appear on their list. "This narrow view of creativity reveals a big problem in our education systems," Dr Yue said. Educational institutions, he believes, should cultivate the concept of "ordinary" creativity in the minds of young Chinese, so that they realize that all fields have the capacity for being creative.

Future research
When asked about his future plans, Dr Yue said his intention is to continue his twin-line study. Adolescent idol worship is but a piece in the grand puzzle of idolatry in China. He plans to explore two other kinds of idol worship as well: political and religious, based on his knowledge about adolescent idol worship. "I'd characterize adolescent idol-worship as essentially recreational, meant basically for entertainment. It would be interesting to compare it with idol worship that's aimed at political and religious gratification," he said. Similarly he intends to look into such questions as "What social, political or educational values are attached to such a view of creativity?" and "What implications does it have for educational practices in Hong Kong?" After all, Dr Yue remarked, "My studies are done by young people and for young people."