Finally, change is on its way...

In Hong Kong, youth research under colonial rule was primarily remedial in nature, focusing on topics such as outreach services and rehabilitation programmes, whereas youth research post-1997 emphasizes the cultivation of leadership and patriotism, social participation, as well as the adoption of a global or Greater China perspective. 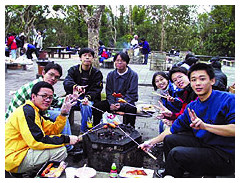 In his Policy Address 2000, the Chief Executive, Mr Tung Chee-hwa, outlined, at length, his policy on youth welfare and development in the millennium, indicating that youth-related issues would be given top priority on the government's agenda. The then Financial Secretary, Mr Donald Tsang, also announced in his last budget the investment of $100 million on youth services, marking, for the first time in a decade, the government's firm commitment to youth welfare. Very much in line with the government's attitude was the formation, earlier this year, of the Dragon Fund, a Hong Kong-based foundation, which aims to promote cultural exchange and development of Chinese youth the world over. In a much fuller sense than ever before in Hong Kong's history, our young people will become the future leaders of not only our society, but our country.