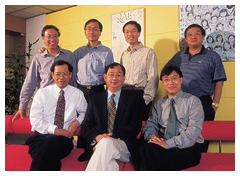 Launched in late 1998, the Centa-City Index is a collaborative venture between City University's Management Sciences Department and Centaline Property Agency Limited, a leader in its field in Hong Kong. The Index in fact comprises two indicators: the monthly Centa-City Index (to be released on the 18th of each month), which draws on Land Registry data on monthly property transactions, and the weekly Centa-City Leading Index (to be released every Friday), which relies on data from weekly transactions handled by Centaline.

Both indices rely on a number of constituent estates (at present: 18) and had a base of 100 on 1 July 1997. On 30 September 2001, for example, the Centa-City Index and the Centa-City Leading Index stood at 42.37 and 40.65 respectively. The former, released on 30 July, draws on transaction data in the month up to 30 June, while the latter, reflects data in the week before 30 September.

Based on Centaline's transaction data in the previous week, an adjusted unit price of an estate for the current week is computed and published on the Web. This looks like a relatively simple step. The contribution by CityU's team, however, lies in its expertise in providing a formula to determine the market value of each property.

A regression model will take into account the relative effect on the property's value of such attributes as size, years of occupancy, location, direction, view, floor level, transportation, external decor, facilities and management services. Since 1994, Centaline has, with the help of a contingent of property agents in the field, started to meticulously gather and update such data on all properties in the constituent estates.