In a recent conversation with Linkage, Mr Charles Wong, Director of the School of Continuing and Professional Education (SCOPE), had two messages that came across loud and clear. The first was that SCOPE is an asset to the University. And judging by the number of courses SCOPE offers (252 at all levels), the number of enrolled students (around 23,000 in 1999/200) and the annual revenue generated ($154.6 million in 1999/2000, or 7% of the total recurrent income), it is hard to argue with Mr Wong's claim.

The second message was that SCOPE is always on the expansion track. The most recent example that comes to mind is the launch of the Admiralty Learning Centre in late February. The new premises, located on Floor 8 of the United Centre, add 22,000 square feet of space to SCOPE's existing stock. But this won't be SCOPE's only extension this year. "In fact, clinching the deal on the United Centre is purely incidental," Mr Wong said. For several years now, SCOPE has been trying to secure extra space off campus to cope with its ever-growing classes. Before the Admiralty era, the School hired four rooms in the Industrial Technology Centre and some other facilities in the Environmental Building, all within a stone's throw of the main campus. Yet with the Admiralty facilities, at an investment of $100 million, the picture has changed, Mr Wong said. As the University's extension into lifelong learning, SCOPE's arm has reached for the first time to the business hub on Hong Kong Island. "We took a different approach; the University has invested in these premises with an eye to maximizing their use during the day time." Joining hands with the Business Operations Office, SCOPE is now marketing the new centre to the business community as a facility to hire for training purposes.

Getting ready for the new era
All along SCOPE has been investing in the future, Mr Wong said, and the next challenge will be running full-time programmes. In September, to accommodate the Springboard Scheme and other new full-time courses, SCOPE will operate another off-campus site, even larger in scale than the premises in Admiralty. After outbidding over a dozen other competitors in the education field, SCOPE, supported by the University, will take up a seven-year lease on a secondary school premises in Telford Gardens in Kowloon Bay. The building, to be taken over on 1 August for renovation and refitting, has around 70,000 square feet in floor space, 30 regular classrooms, 11 specialist rooms, and an auditorium that can accommodate 250 people seated in every other row during examination periods. All in all, the Kowloon Bay premises will be able to accommodate 1,100 full-time students at a time, although many will still have to travel back to the main campus in Kowloon Tong for classes in general education courses, such as those offered by the Chinese Civilisation Centre. While the University has yet to make a decision on the level and types of student learning services that will be available at the new extension campus, Mr Wong said there will be network links with the Library, the Computing Services Centre and other IT services. "We need additional space between now and when the proposed redevelopment of Tak Chee Yuen, if approved, is completed in four or five years' time," he explained, "To accommodate an imminent jump in the number of programmes on offer." The University proposes to redevelop the senior staff quarters near Festival Walk to accommodate the new Community College and related associate degree programmes. This proposal is still at the initial planning stage. For the time being, however, Mr Wong is not sure if some of the Associate Degree programmes now housed under the College of Higher Vocational Studies will move to the Kowloon Bay campus. The answer to that question depends on the outcome of the planning committee for the Community College. The ad hoc group is believed to have submitted its report to the President and it is expected that a decision will be made soon on the future of the College and SCOPE, both of which are involved in teaching associate degree programmes. 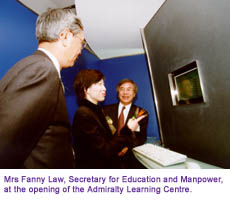 But expanding its physical infrastructure is only part of the story, Mr Wong said. A more far-reaching development has been SCOPE's incessant drive to upgrade and renew its e-learning infrastructure over the past few years. At the e-learning and teaching level, SCOPE has amassed Hong Kong's largest number of on-line certification courses by computer software vendors, through NETg. The School now has under its belt 5,000 learning licenses for 225 courses on IT from major US software companies, including Microsoft (Microsoft Certified System Engineer Examination, for instance), Novell, Cisco and Oracle, and 55 managerial courses on stress management, conflict resolution and the like. Such courses are also made available free to CityU staff, who have to sign up for a minimum batch of 10; the take-up rate hovers at around 10%. But because of the wide spectrum of choice in its e-learning courses, SCOPE has been approached by government departments and community organizations about sub-licensing opportunities, at a minimum of 500 licensees in each assignment. "We are fast becoming an e-learning shopping mall in Hong Kong for our vendor certification courses," Mr Wong said, "Because no other computer schools or dot-com companies have half our offering." Other SCOPE-run programmes, such the iMBA (Interactive Master of Business Administration), in association with the Faculty of Business, also feature a heavy e-learning component.

A bigger and more ambitious e-support framework, according to Mr Wong, has been user-tested and is near completion. Soon, applicants will be able to inquire, apply, register and pay on-line, via SCOPE's new purpose-built website. For example, at the user's end, bookings for SCOPE's free information seminars can now be confirmed at the click of a mouse. School administrators, on the other hand, can quickly design from scratch a customized application form by picking and choosing from a wide selection of 150 fields on the applicant's personal details and academic qualifications. Enrolment confirmations will be handled automatically by overnight e-mails. And payment of course fees will be handled by the Internet version of Payment by Phone Service, linked up to 35 major banks at a very competitive flat charge (compared with the 2% charged by other providers). According to Mr Wong, SCOPE's e-registration system is unique because, unlike those used by other commercial providers, it handles such academic tasks as progressions, transfers and withdrawals. It has so many "ice features" that some Canadian and British universities and local schools have broached the possibility of obtaining a technology license from SCOPE. The next step, Mr Wong said, is e-evaluation and e-certification. As some of the local professional examinations, for example for qualification as an occupational safety technician or engineer, have a high participation rate, SCOPE is considering offering computer-based testing services. " he idea is one can come in to take the test and collect the certificate at the exit when one leaves," he said.

The investment in e-infrastructure (and also in physical buildings) is to better prepare SCOPE for the momentous changes ahead in post-secondary education. The Chief Executive has unveiled a plan to double the available post-secondary places for 60% of the eligible age group in Hong Kong in 10 years' time, and most of this expansion will come from associate degree places. Mr Wong, who also chairs an Education Commission Working Group on Continuing Education, said that the Government is pushing for three areas of change to meet the target: enacting a post-secondary ordinance, beefing up accreditation capacity and building up a Hong Kong-wide qualifications framework. The main thrust of the changes is that the number of providers of associate degree and other life-long education programmes is expected to increase by leaps and bounds. "Although every university and college will surely jump on the bandwagon," Mr Wong said, "no single institution will be able to meet the exploding demand." But those--CityU's SCOPE for one-- what already have plentiful experience in continuing and lifelong education, know the market well and have a flexible and scalable infrastructure, will play a leading role, he believes.