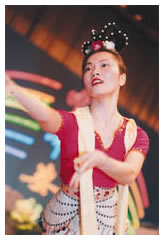 With all its depth and variety, is difficult to beat in the arts department. But when it comes to presenting events in Hong Kong featuring Chinese culture, CityU wins hands down every time. 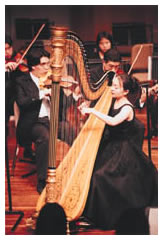 China Splash featured an array of performances and activities, both ancient and modern. The festival, held annually since 1998 to help promote whole-person education, ran through the end of April.

Meanwhile, CityU's Voices of Spring-at the Hong Kong Arts Centre on 2-3 March-combined a wide range of poetry, prose, drama and song in one sensational extravaganza, providing the public with a stunning example of Chinese culture. Voices of Spring, hosted by the Cultural and Sports Committee in co-operation with the Putonghua Langsongshe and Theatre Space, displayed the many facets of Chinese culture in 15 scenes. In addition to staff and students from CityU and other tertiary institutions, several prominent artists from mainland also participated in the performance. 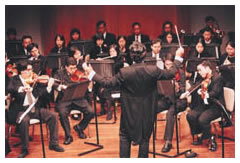 "Wow! A show featuring a poetry recital has finally been held in ," Mr Da Shichang, one of 's top actors, said after the performance. I've been looking forward to this day for a long time."

Creative writing and its place in Chinese culture was in the spotlight in the finale of China Splash. Six masters of contemporary Chinese literature gathered on 6 April at an open forum on the development of Chinese creative writing, and its prospects for the future. The forum's distinguished panel consisted of the adjudicator for the Nobel Prize for Literature, Professor N G D Malmqvist, novelist Nieh Hua-ling, literary critic Liu Zaifu, and poets Cheng Ch'ou-yu, Ya Hsien and Yang Mu. 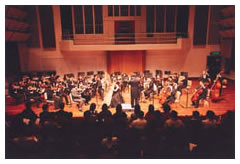 Culture, however, is not all about art and literature, song and dance. And the opening of CityU's Wellness March 2001 provided a perfect day for a break: moderate temperatures, a pleasant breeze, and over 100 participants eager to get the event rolling.

Wellness March, one of several annual events organized by Student Development Services, is aimed at promoting whole-person development and a healthy and positive lifestyle among students and staff. More than just a walk around the campus, the six-week 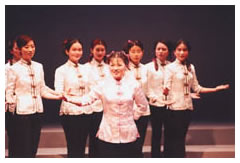 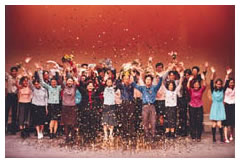 Professor Wong encouraged all staff and students to join in the programme. "With proper health and fitness, we will not only live happier lives, but achieve more self-confidence as well," he said.