Breaking out of the box: School of Law reviews legal education

Big changes are afoot in the way law is being taught, and will be taught, at CityU, with a major review of the substance and structure of legal education currently underway in the School of Law (SLW).

Acting Dean, Mr David Smith, said SLW now recognizes that there has been undue emphasis on the teaching of legal doctrine and that more emphasis must now be placed on teaching legal reasoning: teaching students to think like lawyers.

More emphasis will also be placed on teaching about legal process-how laws are created and administered and how the judicial and administrative processes work. And there will be more discussion of values: who does the law help, who does it discriminate against, and are the legal system and professional services accessible to all? "We feel we need a more dynamic approach to teaching law than may have characterized the School in the past," Mr Smith explained. SLW has to provide more skills training for its students, not just in analytical thinking but also in advocacy, negotiation, problem solving, research and writing, and in understanding law in its social, economic and political contexts.

Orientation Week has major impact
One response to the call for change was the launch last September of an Orientation Week for Bachelor of Laws with Honours (LLB) students, to give them a broad overview of law and the legal profession. Members of the profession visited CityU and talked to the students about their work, what it means to be a lawyer, and the special qualities a lawyer needs. "That programme had a major impact both on the students and on the teaching staff because it opened the window to what the possibilities are in legal training and law practice," Mr Smith said.

The School has also taken steps to introduce new courses. "We've been working on educating students about the variety of fields they can go into within the law and some of today's growth areas include international property law, communications law, cyber law, environmental law, trade and investment, the WTO, legal services for the poor, and Chinese law generally," Mr Smith said. Two new courses on cyber law and law of the European Community were introduced this academic year.

Another reason for undertaking the internal review is that there is a general review of legal education underway in today. A steering committee, chaired by the Solicitor-General and comprising representatives from the Law Society, the Bar Association, the two law schools and others, has been formed in response to the suggestion that Hong Kong is not producing the quality lawyers needed in today's world. Two legal educators from have been retained as consultants to the committee.

SLW put together a major document expressing views about the future of legal education in for use by the consultants. The document was agreed upon by the School Board and represents a substantial analysis of various issues in legal education. "The consultants have told me that they found this to be a particularly valuable report," Mr Smith said. "This was possible because of a forward-looking attitude among our teachers and a recognition that we should play a leadership role in legal education in and ."

Another factor affecting legal education in , Mr Smith said, is that the Chinese government has indicated that special consideration will be given to lawyers to allow them to take the mainland qualifying exam. "That opens up a vast field of practice for Hong Kong lawyers but two things need attention: our students have to have a legal education that will allow them to compete effectively with mainland lawyers (and lawyers trained elsewhere); and they need to learn a lot more about both Chinese law and China. So we have to figure out how to integrate this into our curriculum. In this connection, the Chinese Civilisation Course is a very important building block for our students." 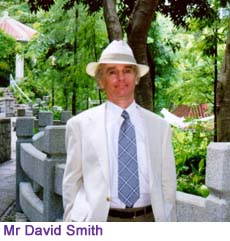 In training lawyers for and for work in the mainland, SLW is working under a severe handicap, Mr Smith said. The LLB programme is only three years in duration and, like other undergraduate programmes, many students come directly out of secondary school. The ideal education for a lawyer, Mr Smith believes, should include the acquisition of broad social awareness as well as technical professional competence. "That awareness is very often lacking in students who come straight out of secondary school and we have limited opportunity to provide that in the three-year LLB curriculum." If undergraduate education were to be expanded to four years, he said, this would give SLW more room to provide students with more of a liberal arts education to supplement their legal education, but even that is not likely to be enough.
What particularly concerns Mr Smith is that in the mainland and in , and , universities have developed, or are considering programmes in which students can study law after obtaining a degree in another discipline. "I worry that Hong Kong is going to be left behind, that our lawyers are going to find it increasingly difficult to compete with these more mature, sophisticated lawyers,?he said. And while SLW can make improvements and do its best in educational reform, ultimately it requires real commitment by the Government to change and substantially upgrade the current system of education for lawyers. 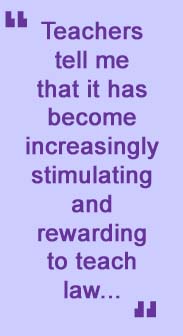 The School has built a foundation for moving in the direction of graduate legal education: it admits a number of students who already have degrees in other disciplines to its LLB programme. In addition, the recently introduced BBA (Honours) in Accountancy and Law enables graduates from that programme to convert into the LLB programme. "So that's another way to be able to teach law at the graduate level. I still would like all those students to have much more exposure to the liberal arts and sciences and some experience working in the real world, but it certainly is a step in the right direction," Mr Smith said.

Developing exchange programmes with mainland universities and universities overseas is another priority for SLW. Some students went to Xi'an University for a two-week workshop last year and 30 students from and came to CityU last August.

"The more interaction you have between and mainland students the better for the future of ."

The School has also established exchange relations with in , in , and Northwest University of Politics and Law in . One of SLW's first major undertakings with the latter was a joint conference in November last year on the WT" and the opening up of 's west. Papers presented at the conference by SLW and mainland scholars are currently being edited for publication in a book.

Rethinking legal education
Traditionally, has in some respects regarded legal education as largely technical training. With the help of a visiting specialist on pedagogy, SLW teachers are focusing on making their classes more interactive, on teaching more skills in the classroom, and using non-doctrinal materials that help to give students a greater sense of the social and economic setting in which law functions, Mr Smith said. "The teaching staff has been very responsive to, and energized by, the rethinking of legal education and I believe we'll see increasing motivation in the classroom here." The School is also experimenting with integrating the lectures and tutorials, using more of a seminar format. Combining lecturing with discussion and questions will encourage greater interaction among students and produce better-trained students, Mr Smith believes.

Another area where SLW has made significant progress relates to raising overall admission standards for the LLB and the Postgraduate Certificate in Laws. This change, coupled with the increased recruitment of overseas students, has helped to raise the level of legal education at CityU. "Teachers tell me that it has become increasingly stimulating and rewarding to teach law because the quality of the students continues to grow-and this is very important for the University."

As far as research is concerned, Mr Smith said SLW has been productive, with seven books and 87 journal articles produced by a faculty of 35 in 1999-2000. In addition to holding periodic seminars to talk about research in progress, the School has also reduced teaching loads to around nine hours per week. "I think that's helped a lot," he said. "I think there's a stronger research culture in SLW now, with people showing drafts of their work to other faculty and constantly raising publication standards. "All in all, the stage is set for breaking out of the box and designing a system of legal education that will provide the quality lawyers needs to maintain a leadership position in and the region." I think that in the next year or so we can make very significant changes at CityU," Mr Smith stated. "The faculty is committed, we are a small school and we have the flexibility to adapt quickly. The beneficiaries will be the students, the staff, the profession, and society."