Southeast Asian studies off to an audacious start

The ceremonial banging of a gong by CityU President Professor H K Chang and Professor Wang Gungwu heralded the official opening of Hong Kong's first formal institute dedicated to research on Southeast Asia on 27 February. Guests, including the Consuls-General of Indonesia, the Philippines, Malaysia, Singapore and Myanmar, and the Deputy Commissioner of the Chinese Ministry of Foreign Affairs, packed the SCOPE Lecture Theatre for the inauguration of the Southeast Asia Research Centre (SEARC). Professor Chang, Professor P S Chung (Vice-President for Research), Professor Kevin Hewison (Director of SEARC) and Dr Vivienne Wee (Programme Co-ordinator of SEARC) officiated at the colourful ceremony. 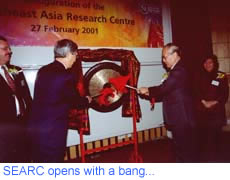 SEARC's research theme--Remaking Southeast Asia in a global context: cultures, development, challenges"--defines the Centre's focus on Southeast Asia as a region where societies, cultures and nations are reinventing themselves within the context of an increasingly globalized world, Professor Hewison told the audience in his introduction. "Our research programmes will examine the effects of globalization on the region, the various schisms lying beneath the surface of Southeast Asian relations, and the interactions between peoples, communities and nations." 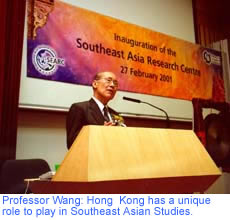 The different religions of the region--Hinduism, Buddhism, Theravada Buddhism and, later, Islam and Catholicism--all played their part but the most important fragmentation was that brought about by colonial rule: Dutch, Spanish, French, British and, eventually, American. "However, even during this period, there was a shaping of the region as an economic extension of a larger world that was expanding into the beginnings of something like globalization," Professor Wang said.

Sensing a common identity
The next stage in the region's development came when the economic, cultural and political shaping by external forces led to the point where the people of Southeast Asia had begun to sense a common identity. ?hey were always aware of commonality in their hearts but I think a sense of definite identity as Southeast Asia is only just beginning. It's a very exciting moment for the region," he said. And it is also reflected in the fact that ASEAN--the Association of Southeast Asian Nations--now has 10 members, which indicates to Professor Wang that, for the first time in history, there is a desire to make the emerging sense of identity something more real.

China has been conscious of cities in the region for around 2,000 years, and increasingly so since the 19th century, when many Chinese peasants and artisans migrated to different parts of the region. "China's interest in the region followed global trends," Professor Wang explained. "But now its attitude has changed and it is no longer just a trading concern but a diplomatic matter for China to be deeply interested in the affairs of Southeast Asia." In fact, Southeast Asia is now regarded as a friendly, prosperous region that is very important to China's own economic development.

Hong Kong's unique role
Hong Kong can play an important role in the continuing development of the region, he believes. Its location is vital to the future of the relationship between China and Southeast Asia, but Hong Kong is also an international city, "one of the hubs of the globalized world." In that context, it can help China and Southeast Asia play a more direct part in the way the world is being globalized.

It is a particularly apt time for CityU to set up a centre of Southeast Asian studies, Professor Wang said, and he believes the Centre has found the right research focus. However, he cautioned, there are other centres where high quality work on Southeast Asia is also being carried out and SEARC must cooperate internationally. "Ultimately, the contribution the Centre will make is high quality research, which is independent, objective, scientific and done with no other objective in mind than to find out what makes Southeast Asia work. I believe CityU has the capacity to do that."