SCM to cross all disciplines

Always fond of the homespun expression, Deng Xiaoping used to say that ’s cautious approach to reform was like "crossing the river by feeling the stones under one's feet". Yet that same down-to-earth wisdom, says President H K Chang, also holds true in our knowledge-based society, where sudden and explosive changes in technology and the Internet leave us all at times struggling to feel our way through the rapids. 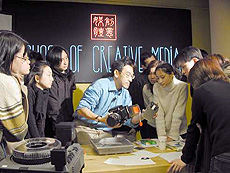 And so it comes as no surprise when, asked about the future of CityU's ambitious School of Creative Media (SCM), Professor Chang quotes the visionary Chinese leader to describe the difficulty of steering the fledgling School towards international pre-eminence. "From very early on, when I first proposed establishing the , we knew we were going through uncharted waters," said Professor Chang. "We had a feeling that this was the right thing to do, but we were initially not entirely sure if we were going about it the right way. We had to chart our course. We had to find out where the boulders were."

And now, just two-and-a-half years after it was founded, the SCM, in consultation with the President and a new Board of Advisors, has mapped out a definite route for itself. Beginning next semester, it will offer, for the first time in , a Master of Fine Arts (MFA) degree. Plans have also been announced to proceed with the construction of a , to be completed by 2004 or 2005. And perhaps more importantly, a new Board of Advisors has been appointed to help direct the SCM towards its goals. 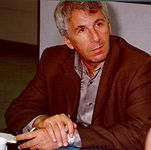 Wu, managing director of Sun Television Cybernetworks Holdings Ltd. In a nutshell, said Professor Chang, the advisors recommended that the SCM needs top management involvement, that its curriculum be balanced between the creative and the technical, and that the School draw ideas and input from all other faculties at the University.

"The advisors raised some very valuable comments for us to ponder over. They are not saying that we are currently ignoring any of these issues--they are saying we must watch out and not deviate from these goals," Professor Chang explained. "In fact, they all gave very high praise for the achievements we've made so far. They were particularly impressed with our rapid development, which was done in typical style--so much progress in such a short period of time."

One of the key areas both the President and SCM Director Professor Christine Choy will be vigilant about is the admission of talented students who are capable in creative as well as technical endeavours. "You can't give a mason a chisel and expect him to produce a 'David' or a 'Pieta',"said Professor Chang.

Indeed, it is this transformation of the artist into a well-rounded individual capable of not only creative action but endowed with a host of other skills in such diverse fields as business and technology that sets the SCM apart from all other similar schools. "The interesting thing that came out of our discussions with the advisory board was deciding that what we are talking about developing here is a true multi-discipline programme," said Professor Choy. "And that means not only technology, but also the humanities: philosophy, politics, ethics, and more. We are going beyond that- much deeper."

To this end, the School has announced the launch of its MFA programme, the first of its kind in . Starting next semester, the SCM will enrol 20 new students in its first-ever graduate programme.

MFA a stepping-stone to industry
"The MFA is a stepping stone to a much more inter-related discipline," said Professor Choy. "Critical thinking is an important part of the MFA programme. This will help reorganize students' thinking patterns. The objective of the MFA programme is not only the acquisition of media arts- we do not want all pure artists, or engineers or technicians, but a combination that will join in our project to create this new discipline.

"This new discipline is crucial for this region, and I'm pretty excited about it. There are plenty of computer scientists out there, but how many of them can apply their very specialized knowledge in creative way? It? almost unheard of."

Associate Professor in the SCM, Dr Steve Fore, who headed the MFA programme planning team, said it was important that the School move to the postgraduate level. "We decided on an MFA for a variety of reasons," he said. "It's the highest academic credential you can get in the creative field--It's a terminal degree. And we were looking at other arts programmes in and nobody was offering an MFA—except a fairly small programme at the of , and I think they have two students.

Dr Fore expects that graduates of the programme will be well rewarded upon graduation, moving into industry jobs of serious responsibility. "They'll also have a serious portfolio, as well as organizational and practical skills and a nicely limbered up imagination, which is precisely what the industry here is asking for," he added.

In the future, postgraduate studies won? stop with the MFA, Dr Fore predicted, and the School is looking at what it might do with MPhil, and research and humanities-related areas as well.

SCM programme unique
Dr Steven Fredericks, COO and CFO of Yack Inc, the world leader in online guidance to Internet events, was one of four new advisory board members who visited CityU in December. Dr Fredericks said that while he was impressed with what he has seen the School do so far, he would like to see it progress even further in the future. "In my view, there is really nothing in along these lines," said Dr Fredericks, whose former company, Digital Domain, worked on films such as Titanic and True Lies. "I don't know of any programme which is starting from the ground up—and is being driven by the creative side. Art schools have it, but they erred to the other extreme, not taking into account technology. But within a large university it is my belief that this is the only one of its kind in the world."

Although acknowledging the importance of attracting creative talent to the School, Dr Fredericks also stressed the need to blend technology and the humanities into the curriculum. "I think there has to be a synergy between industry and the school," he said. "I think there has to be an understanding of the industry's requirements. You have to produce students with skills that are marketable. I think there ought to be a fairly broad curriculum, where they experience all areas of media. We're not creating programmers. Think of it as painting on a computer." to be multi-disciplinary

With all the new developments, the principal problem faced by the SCM is lack of space. Not to mention the 40 staff that work there, the School's 185 students will swell to more than 250 later this year with the addition of MFA and third-year bachelor's students. This will be corrected by 2004 or 2005, when the 13,400-square-metre , on

Professor Chang pointed out, however, that the new structure will not only house the SCM, but portions of other faculties that interface with the School. These include everything from computer science to electrical engineering. "The SCM will be a waste," explained the President, "if there is no input from the -- regarding intellectual property and so forth -- humanities, social sciences, business and science and engineering. The SCM must draw on the strengths of all the other faculties. There must be ample interaction and infusion of talent from other schools."

With its multi-disciplinary nature and ambitious goals, the SCM's journey to the other side of the river will be one deserving a great deal of attention.