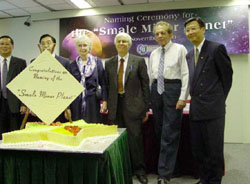 The minor planet was discovered in 1982 by L G Karachkin of the Crimean Astrophysical Observatory in . The idea for naming the asteroid after Professor Smale was suggested by Professor Victor Yudovich, of ’s Rostov State University.

“We still don't know if there’s life on Mars-and now the question is, ‘Is there life on Planet Smale?’” joked Professor Yudovich at the ceremony.

Professor Smale, whose significant achievements in science and mathematics led to the naming of the minor planet in his honour, said he was happy that his long association with was partly responsible for the dedication of the asteroid in his name. “I especially appreciate the Russian connection,” he said.