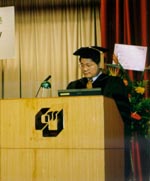 Everyone expected Professor Leung Kwok's inaugural lecture to be interesting. But despite the title, "Justice for All: Psycho-logical Insights for Creating a Fair World", no one could have predicted how useful his insights might be in their daily life.

Social scientists study subjective principles of justice-principles that determine people's perception of a social situation as just or unjust, he said. Many studies in recent years have looked at justice perceptions in different cultural settings, in a bid to determine whether justice principles are universal, as philosophers argue, or context-specific. From these studies, including many of his own, he concludes: "It's hard to have a justice norm that's seen as fair by people of various backgrounds in various contexts."

Professor Leung has done a lot of studies comparing justice perceptions of Hong Kong Chinese and Americans. He has found that Chinese tend to emphasize harmony with in-group members. If they do better than others, they argue that rewards should be distributed equally. If they perform relatively poorly, they argue that rewards should be based on merit, which is against their self-interest. "A willingness to sacrifice for core in-group members is much less observable in a Western context. I think it's now declining among Chinese too," he said.

As for what makes a decision fair, Chinese disputants tend to rely on a high-status third party to determine the facts and the truth of a case and they tend to abide by the party's verdict. In the West, status is less important. Disputants argue for their own case and the third party judges which side holds the truth. The disputants are more likely to challenge the decision.

He has also found that Chinese are more likely to accept critical remarks from a high status in-group source. If the same remark comes from an out-group member, it's more likely to be resisted or rejected. Americans had similar reactions whether the remark came from a high or low status person, from within or outside their group.

Other researchers have found that the same behaviour by a supervisor may be perceived as caring in Hong Kong or and as an invasion of privacy in or the . "When people work together in an alliance or a joint venture, small things can add up and they can start disliking each other very quickly," he said. "Without knowing the content of my lecture people can easily misinterpret well-meaning behaviour."

Why do people become so angry when they are treated with injustice? He believes it's because fairness signals one's value in a group. "If you are a valued, core member of a group then you will receive fair treatment. If you are subjected to injustice, that signals you are a peripheral member, an unwanted member, somebody who is of low status in the hierarchy. That's why there is such a strong anger reaction."

Social scientists used to think that people base their justice perceptions simply on how resources are distributed and how decisions are made. "Research in the past 10-15 years shows that interpersonal treatment plays an extremely important role," he said. "Here again culture comes in in a big way." With cultural contact on the rise, people with differing justice norms are frequently brought together. "When two parties with opposite ideas of what is fair meet, the result can be disastrous. People can engage in unproductive conflict for a very long time."

Professor Leung invited his audience to take home this message: "Fair rules and procedures are not sufficient. If you think you've done all you can to maintain justice, that's not enough because people may see things from a very different angle, they have different rules, different criteria." He suggested three things decision-makers can do to manage fairness perceptions. First, communicate as much as possible-it's always useful to give an account of why a decision has been made. Second, invest heavily in high-quality interpersonal treatment, which can cushion negative news. Third, and most difficult, be consistent.

Social organizations of all kinds increasingly comprise people who identify with and adhere to different cultures. Business organizations are also becoming multicultural and global. World problems such as global warming or ozone depletion call for multinational effort. Professor Leung concluded: "A better understanding of culture is crucial to finding effective solutions to all of the problems affecting our world."