Research co-led by academics at City University of Hong Kong (CityU) has discovered that the phenomenon of human self-organisation known as synchronisation forms spontaneously to avoid inter-person collisions when the safety distance between pedestrians seems insufficient. The findings provided insights in preventing pedestrian synchronisation-induced wobbling effect in structures, ensuring pedestrian and transportation safety.

Synchronisation means pedestrians in a crowd involuntarily adjust their footsteps and align their stepping phases with the person in front of them. “In engineering, crowd synchronisation is often linked with the structural stability of buildings and has been identified as a major cause of lateral vibration in some footbridges,” added Dr Ma who is both the corresponding and first author of the paper.

Understanding such collective motion behaviour of humans may help prevent the synchronisation-induced wobbling effect that can affect different kinds of building structures, for example, suspension bridges. The wobbling of the London Millennium Bridge on its opening day in 2000 is a classic example. On that day, flooded with visitors, the bridge shown unexpected swaying. It was eventually closed after just two days and remained closed for two years until modifications were done. The incident triggered lots of related research in engineering and science.

Reveals the mechanism of crowds synchronisation 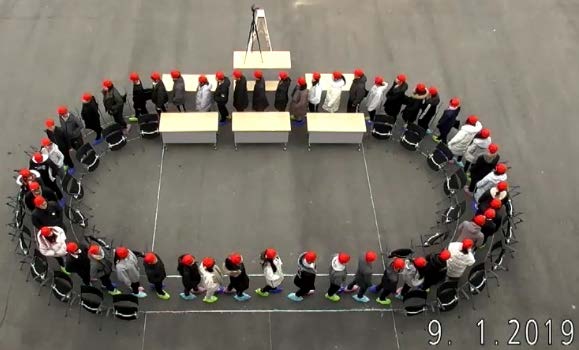 In the experiment, each participant wore coloured markers on their head, left foot and right foot, and their motions were monitored with three camcorders filming from three different angles. The team conducted 14 experiments in seven different densities with 10, 20, 30, 40, 50, 60 and 70 participants. Data of a total of over 9,000 footsteps were collected from the participants for further analysis.

Synchronise footsteps to avoid collisions when safety distance is insufficient

The results indicated that synchronisation rarely occurs at low crowd density because at low densities, pedestrians could move freely at their own pace, instead of following their predecessors’ stepping pace. The team discovered that synchronisation is most likely to be triggered at the density of 0.87 people/m, at which the flow rate of pedestrians reaches a maximum value.

Also, the research revealed that the closer the pedestrians’ headway is to 1.15 metres, the smaller the safety distance would be for pedestrians, and thus the larger the potential collision risk. The follower was more likely to synchronise his/her steps with the predecessor at this level of pedestrian density. Synchronisation is most likely to be triggered in this critical density.

“Synchronisation is established as an involuntary response to an insufficient safety distance between pedestrians and a critical density, which enables pedestrians to realise efficient collective stepping motion without the occurrence of inter-person collisions,” said Dr Lee from CityU, the second author of the paper. “Synchronisation enhances coordination and cooperation among members of a crowd and is believed to increase movement efficiency,” added Dr Ma.

Dr Ma also pointed out that the density at which synchronisation occurs may vary for crowds with a different culture and demographic characteristics, and be affected by environmental factors. The density they revealed in this research may not be applicable to other places. However, he believed that this research facilitated an understanding in the formation mechanism of crowd synchronisation, which is useful for research involving the synchronisation phenomenon in many other kinds of crowds, such as animal groups, self-propelled particles and multi-agent systems.

The funding support for the study included the National Natural Science Foundation of China.