A research team led by City University of Hong Kong (CityU) has discovered a brain signalling molecule that can improve decision-making performance. The discovery paves the way for effectively mitigating cognitive dysfunctions caused by chronic pain.

The ground-breaking discovery involves the role of astrocytes in the decision-making dysfunction caused by chronic pain. Astrocytes, star-shaped cells in the central nervous system, are well equipped to influence neuronal functions. The researchers found that L-lactate released by astrocytes are utilised by neurons to affect information flow and synchrony in the brain neural circuitry, and hence can improve decision-making performance.

The research team is led by Professor Li Ying of the Department of Biomedical Sciences. One of his core research areas is the correlation between chronic pain and brain functions.

The clinical connection between visceral pain and increases in levels of anxiety, depression and cognitive disorders such as impaired decision making has long been recognised. However, the underlying brain neural network mechanisms are less clear.

Using the “chronic visceral pain rat model” previously established by Professor Li’s team in the University of Michigan (National Institute of Neurological Disorders and Stroke), as well as optogenetic approach and microdialysis, the research team found that the L-lactate released by astrocytes, a kind of the glial cells, in the anterior cingulate cortex (ACC) can promote information flow and synchrony in the brain neural network (basolateral amygdala (BLA)-ACC neuronal network synchrony), which facilitates decision making performance in rats.

Animal experiments in their research also show that an L-lactate infusion into the ACC in the brain increases the percentage of good decisions among normal rats by up to 48% and significantly relieves decision-making dysfunction in rats with chronic visceral pain.

“The truly novel discovery of our studies is the role of L-lactate in neuronal activity plasticity and neuronal network synchrony in the brain,” said Professor Li. “The findings reveal that L-lactate should no longer be considered simply an energy substrate for neurons, but rather an important signalling molecule that can regulate neuroplasticity and synchrony in the brain neural circuitry.”

“The observations of our experiments support the idea of an ‘astrocyte-to-neuron L-lactate shuttle’, and suggest that using L-lactate infusion, optogenetic or chemical genetic technology to activate astrocytes in abnormal neural circuitry may help alleviate cognitive deficit caused by chronic pain,” he added. 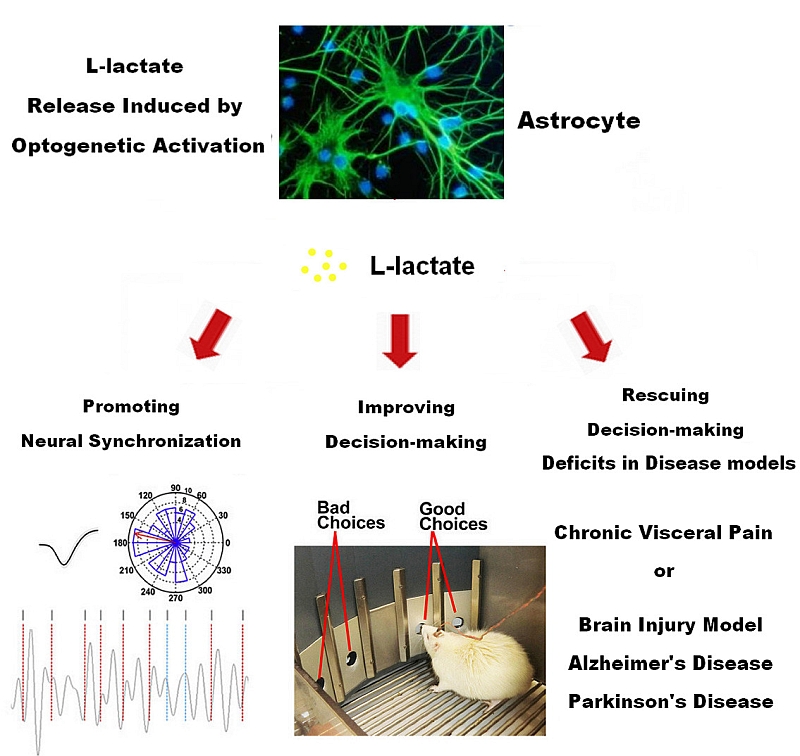 “In the future, we will further study the effects of L-lactate on cognitive functions such as learning, memorising, decision making and perception of pain. By conducting experiments of ‘rat gambling task,’ we will investigate whether the activation of astrocytes can rescue the decision-making deficits in rats with Alzheimer's disease. We will also investigate the role of L-lactate in this process, and explore whether L-lactate generated by moderate physical activity can enter the cerebrum through the blood-brain barrier to improve cognitive functions,” he added.

The first author of the article was Wang Jun from Department of Biomedical Sciences and Centre for Biosystems, Neuroscience, and Nanotechnology at CityU. Other co-authors included Dr Cao Bing, Mu Li, Yang Xiangwei, Cong Mi, and Aruna S. Ramkrishnan from the Department of Biomedical Sciences, CityU, Dr Rosa H.M. Chan, Associate Professor at Department of Electronic Engineering and member of the Centre for Biosystems, Neuroscience, and Nanotechnology at CityU, and Dr Wang Liping and Tu Jie from Brain Cognition and Brain Disease Institute for Collaboration Research, Shenzhen Institutes of Advanced Technology, Chinese Academy of Sciences.