The latest project led by Dr Yuan represents the first known, systematic prediction study in the academic world using observational data about confirmation delay (also called containment delay) from a real-world outbreak. The paper “The impact of multiple non-pharmaceutical interventions on controlling COVID-19 outbreak without lockdown in Hong Kong: a modelling study”, has been accepted by the world-renowned scientific journal Lancet Regional Health: Western Pacific and supported by the Hong Kong Institute for Advanced Study and Health and Medical Research Fund.

Dr Yuan and his team collected data between 17 June and 15 August 2020 during Hong Kong’s ‘third wave’ of Covid-19 from the Hong Kong Centre for Health Protection, notably with the dates of symptom onset and confirmation for each newly imported and local case.

By using a novel approach that incorporates quarantine and isolation, and the variations in confirmation delay (time between symptom onset and confirmation) to a traditional epidemic transmission model, the team has successfully quantified the effect of each major intervention on the effective reproduction number Re.

The study found the percentage of contact-traced cases with confirmation delay can be a useful indicator of the efficiency in contact tracing and testing system. The model shows that after initial super-spreading events, inefficient tracing and testing resulted in a continuous increase in Re in the ‘third wave’ (see Figure 1C). Even though social distancing regulations were immediately tightened, the outbreak continued to get worse. The results also show that initial tracing and testing efficiency cannot be maintained and continued to exacerbate after the number of reported cases was larger than both about 20 cases.

Cases with epidemiological links (epi-link) can be traced and isolated more efficiently, and hence reducing the percentage with confirmation delay and the number of close contacts, than those without an epi-link. After introducing a targeted group testing scheme for certain high-risk individuals, contact-tracing efficiency was restored (i.e. confirmation delay was reduced), which helped suppress the outbreak together with preceding social distancing measures.

The model (see Figure 1) explains the Covid-19 transmission dynamics in relation to the introduction of NPIs. It suggested that neither Tightening 1 (T1: maximum gathering number reduced from 50 to 8 persons) nor the combination of T1 and Tightening 2 (T2: reducing the maximum gathering from 8 to 4) were sufficient to prevent the outbreak from growing exponentially.

The extreme measures (T4) implemented since 29 July had a substantial effect. However, the modelling results show that the daily rate of infections had started to decline around that time (Figure 1B) mainly because of targeting group testing (TT; reducing 20.3% Re (95% CI 14.1 – 25.9%)) and the face-mask rule (T3; reducing 17.5% Re (95% CI 1.9 – 36.4%)) (Figure 1 and Table 1), which were introduced several days earlier. T3 and TT, combined with the effect of the early gathering restrictions (especially T1), reduced Re to 0.9 around 23 July (Figure 1C). The outbreak had effectively been suppressed by the NPIs introduced before T4 (Re < 1).

In order to achieve zero or near zero infections, Dr Yuan recommended the government to improve the effectiveness of tracing and testing at-risk groups in case of border reopening.

“In order to prevent an outbreak, visitors from mainland and foreign countries should be traced with an app combined with extra or even more testing for a period according to the risk of importation. Meanwhile, the risk of contacting confirmed cases to Hong Kong residents should be evaluated more accurately. For example, the chance of being infected is higher at places where people have more close contacts without wearing a mask, such as restaurants and fitness centres. Once there are confirmed imported cases in or around this place, the app should help differentiate the people with high risk for testing at an early stage. Therefore, in order to improve individual risk assessment, the current LeaveHomeSafe app should integrate with passenger mobility data. In addition, mathematical modelling along with monitoring actual confirmation delays and population immunity provides important guidance for avoiding repeated opening and closing of the border or even preventing a community outbreak.” Dr Yuan said.

“After vaccines rolled out, many European countries have lifted travel restrictions since June this year and confirmation cases rose sharply recently, forcing some countries such as Austria to return to a lockdown. This study aims to provide an exit strategy without lockdown by using an accurate assessment of NPIs,” Dr Yuan said.

Full text of this study can be downloaded on the SSRN preprint server.

Figure 1: Covid-19 transmission dynamics in relation to the introduction of NPIs,
derived from the full model (A,B,C) and from the 'reduced model’ (without consideration of changes in tracing and testing efficiency) (D,E,F). 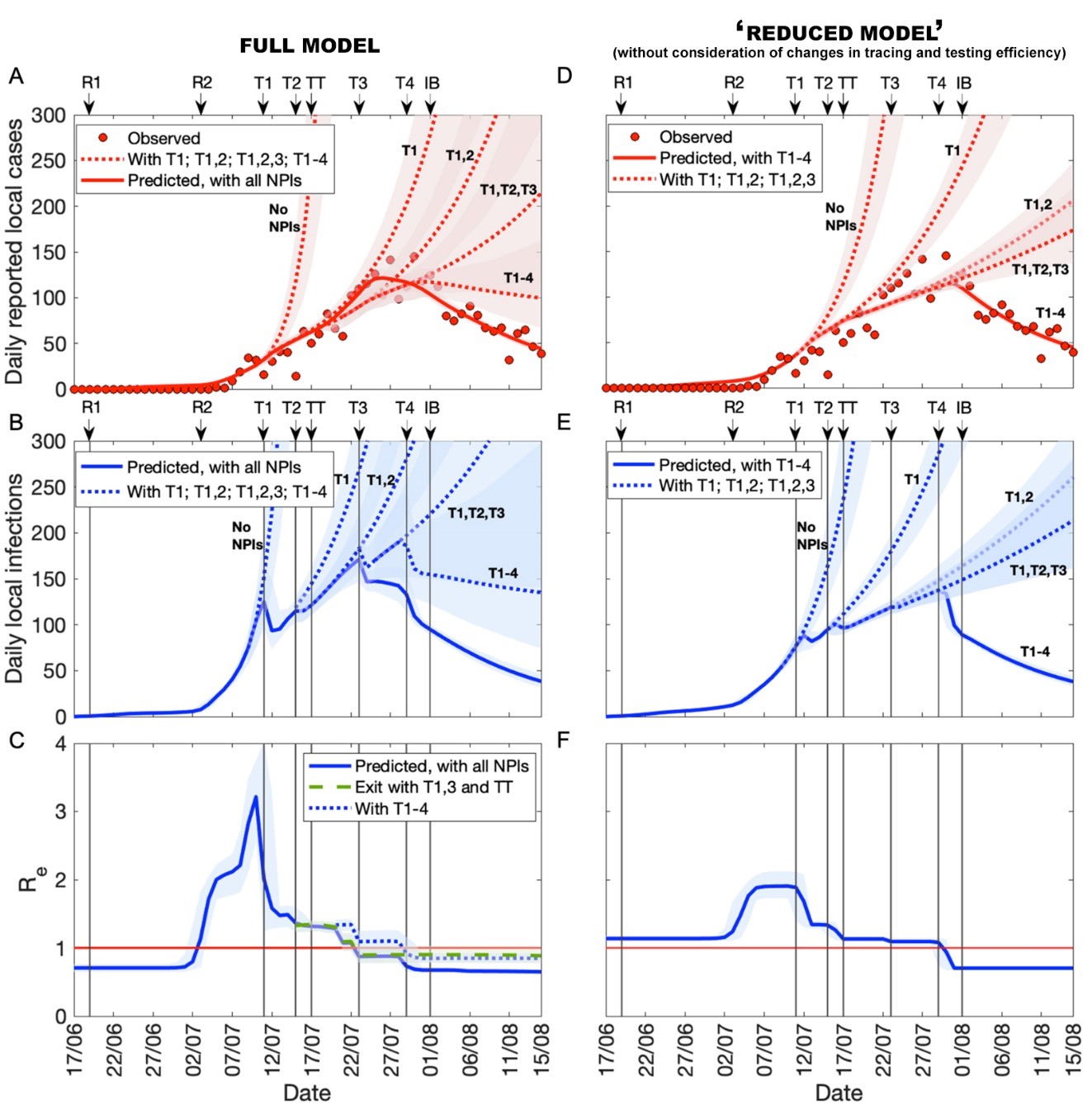 Table 1: Dates of relaxation of social distancing measures and implementation of significant public health interventions. Effects (relative reduction) on Re are listed for NPIs deployed during the outbreak. 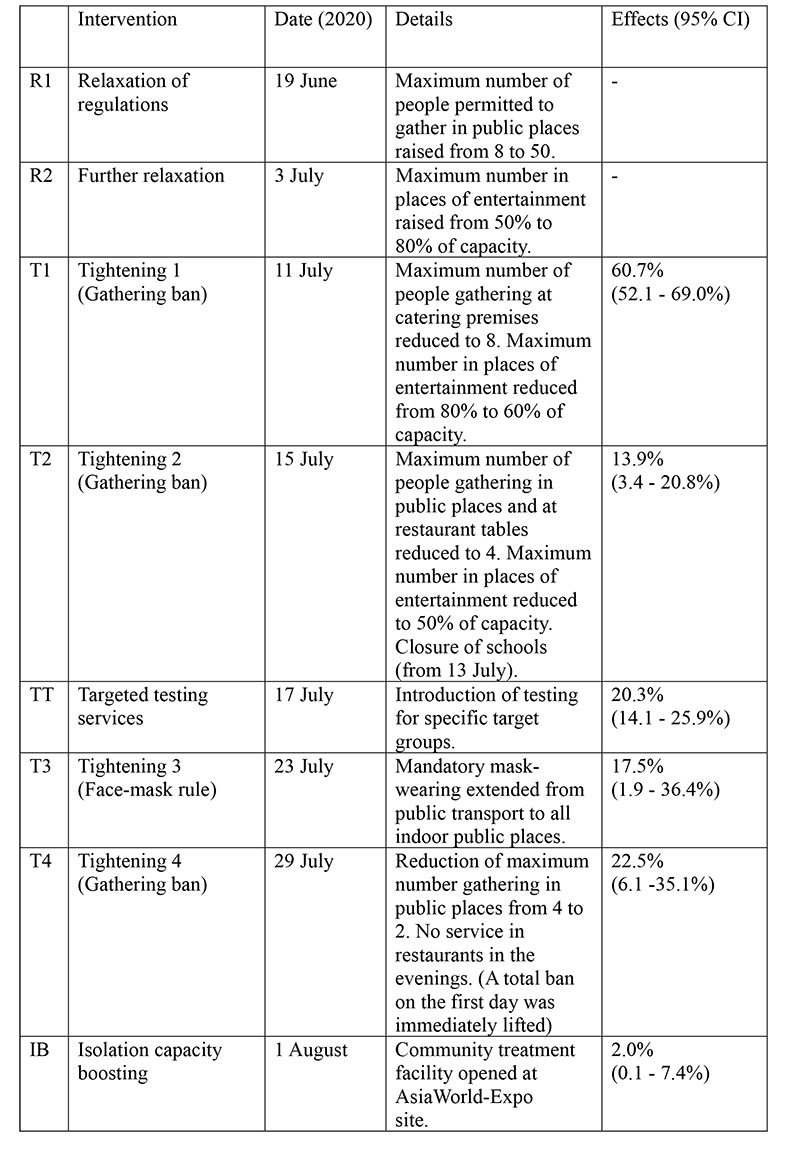