The consumer confidence index for the cross-strait region and Hong Kong and Macau for the 4th quarter of 2018 was announced in Beijing on 9 January 2019.

The Chinese Consumer Confidence Index uses a scale of 0 to 200, with 0 representing “no confidence” and 200 representing “complete confidence”. Indexes below 100 suggest consumers “lack confidence”, while those above suggest “relative confidence”. The overall consumer confidence index for Hong Kong consumers was 80.7, a drop of 3.5 points on the previous quarter. Taiwan has declines 1.1 points on the previous quarter, while the indices for mainland China and Macau have gained 0.07 points and 1.1 points, respectively.

Affected by the slowdown in global economic growth and trade friction between the US and the mainland, confidence in economic development among Hong Kong people has weakened. According to the consumer confidence index for the 4th quarter of 2018, the sub-index of Hong Kong people towards economic development is 88.1, with a year-on-year decrease of 17.5% and has dropped by 7.5% when compared with the previous quarter. It is now at the level of the 4th quarter of 2016.

However, from the absolute value point of view, consumer confidence index for the 4th quarter of 2018 still indicates a neutral attitude. According to forecasts by the International Monetary Fund (IMF) and private sector analysts, the real rate of economic growth in Hong Kong will be in the range of 2.3% to 3% in 2019. Although the predicted growth rate is lower than that in 2018, it is still positive.

Under the influence of the slowdown in the economic growth of the mainland and Hong Kong, together with depreciation pressure on the RMB, the Hong Kong financial market has weakened. The Hang Seng Index fell sharply to 24,500 points from its highest point of 33,000 in 2018 at the beginning of the year. The downward adjustment in the stock market is likely to drag down investment confidence among Hong Kong residents. The sub-index of consumer confidence for stock investment is 78.3, with a decline of 5.3% when compared with the previous quarter, amounting to year-on-year decrease of 13.5%, demonstrating a lack of confidence among the locals in this aspect.

Hong Kong people are worried about the employment situation because of the changing economic situation. In the 4th quarter, the sub-index of confidence among Hong Kong people in employment is 91, a significant drop of 10.4% when compared with the previous quarter, and a year-on-year decrease of 16.1%. However, from an absolute value point of view, the sub-index still fell into a relatively neutral range. According to statistics released by the Hong Kong government, the unemployment rate in Hong Kong remained in the range of 2.7% to 3% from January to November 2018, and the unemployment rate has stabilised at 2.8% since the 4th quarter.

In the 4th quarter of 2018, the commodity price in Hong Kong was stable. The overall consumer price index (CPI) rose by 2.6% in November, a slight decrease from the increase in October (2.7%). It is shown that the overall consumer confidence index for commodity prices is 70.4, a fall of 1.8% when compared to the previous quarter, but a slightly year-on-year increase of 3.8%. From the overall trend over the year, Hong Kong people's confidence in the commodity price remains relatively stable. According to forecasts by the IMF and private sector analysts, the growth rate of Hong Kong commodity prices will remain in the range of 2% to 2.8% in 2019, which is in line with the underlying inflation rate of 2.7% announced in November.

Although the external economic situation is ambiguous, the internal demand in Hong Kong is still relatively rigid. With sub-index measures at 94.1, the locals feel most comfortable about living standards, despite a drop of 8.8% and 14.9% when compared to the previous quarter and the same quarter of last year, respectively. But it is still in a relatively neutral range from an absolute value point of view. According to data release by the Hong Kong government, private consumption expenditure has been expanding significantly, although it has slowed down from the extremely high increase of 7.4% in the first half year of 2018.

Appendix A: Notes for Data Collection
City University of Hong Kong is responsible for the data collection for the captioned investigation. The 4th quarter survey for 2018 in Hong Kong was conducted from 17nd December 2018 to 31th December 2018 via Computer Aided Technology (CATI). The survey received 1,000 effective responses from Hong Kong residents aged 18 or above.

Appendix B: Notes for the Chinese Consumer Confidence Index
The Chinese Consumer Confidence Index was launched in the 1st quarter of 2009 and release on a quarter basis afterwards. The overall consumer confidence score is an integrated index measuring consumer sentiment towards economic development, employment, commodity prices, living standards, property purchases and stock investments. It reflects the confidence level of consumers in mainland China, Hong Kong, Macau and Taiwan. The index is jointly compiled by Capital University of Economics and Business, Central University of Finance and Economics, City University of Hong Kong, Macau University of Science and Technology and Taipei Medical University. 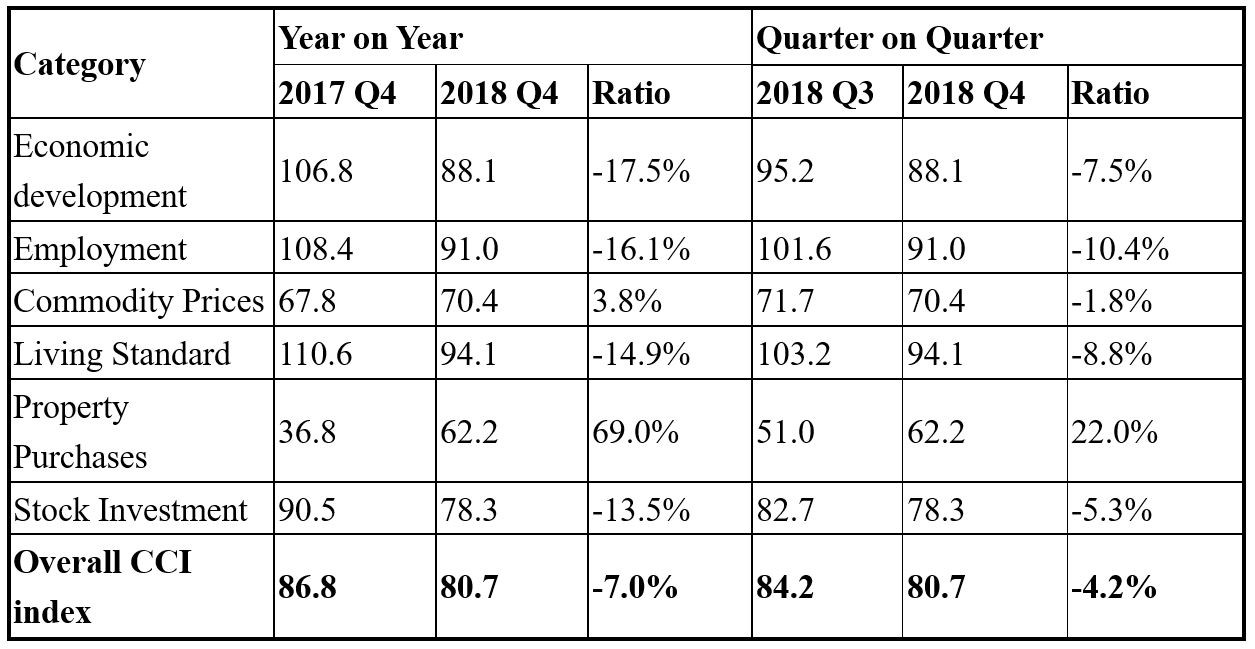 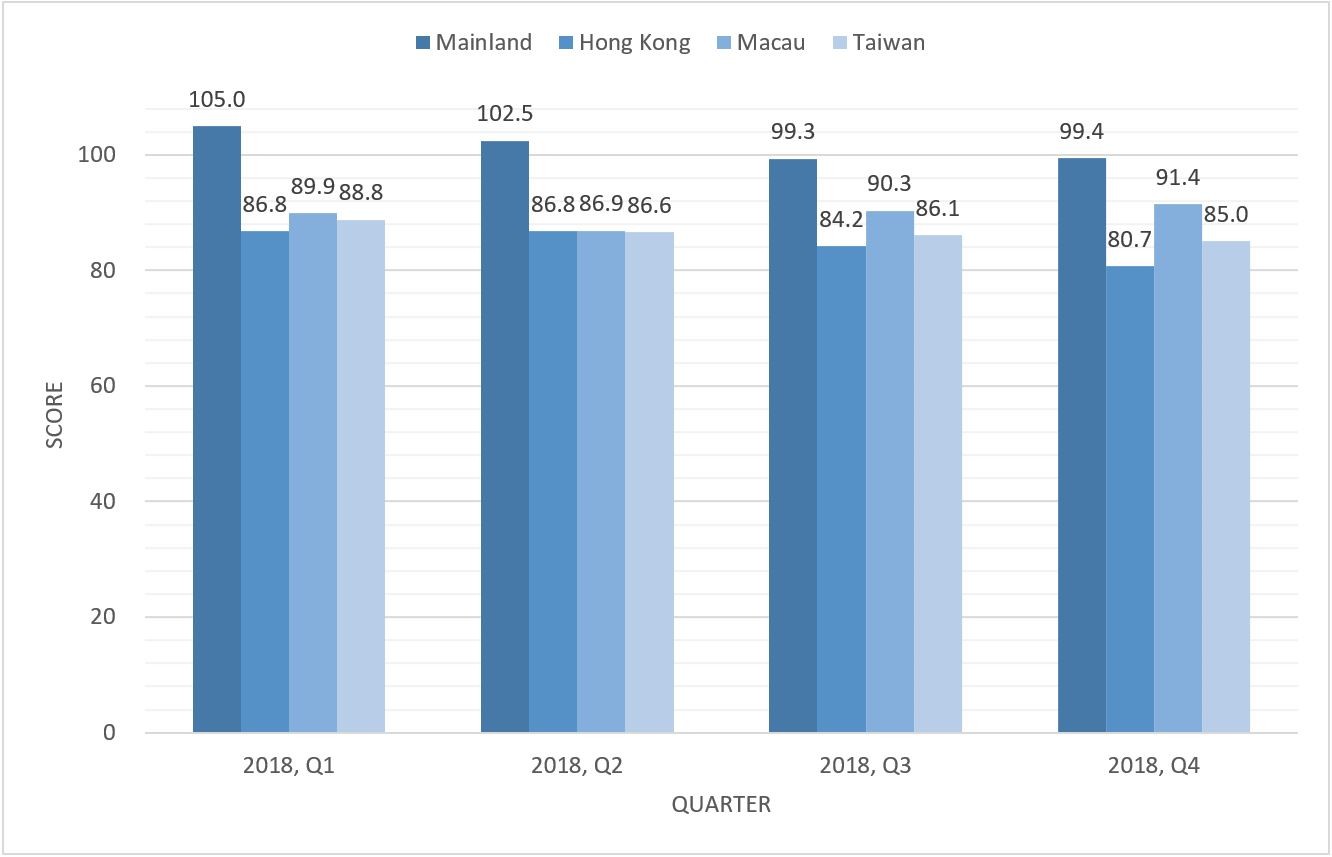