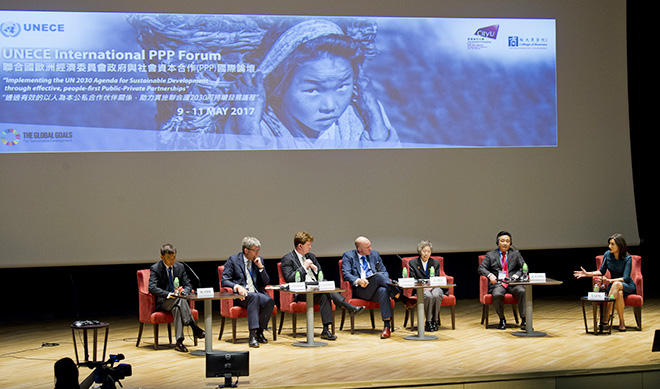 A high-level debate at the forum discusses how the international community could help China to operationalise its Belt-Road initiative and develop more people-first PPPs.
Experts from the public, private and academic sectors discussed the role of public-private partnerships (PPP) for promoting China’s One Belt One Road initiative at a forum organised by UNECE International PPP Centre of Excellence from 9 to 11 May at City University of Hong Kong (CityU).
UNECE is the United Nations Economic Commission for Europe. The second edition of the International PPP Forum was titled “Implementing the United Nations 2030 Agenda for Sustainable Development through effective, people-first Public-Private Partnerships”. The inaugural event was hosted at the UN Office in Geneva.
Professor Way Kuo, University President, said he was excited to host the international event at CityU.
“PPPs hold great promise for the development of society,’ he said in his opening remarks.
A PPP is a partnership of government and private enterprises for jointly developing infrastructure such as rail and roads.

Mr Hamilton delivers his opening remarks.
Mr Geoffrey Hamilton, Officer in Charge, Economic Cooperation and Trade Division at UNECE, introduced the UN 2030 Agenda for Sustainable Development in his address. He also welcomed participants on behalf of UNECE.
Mr Hamilton did not pretend PPPs were easy or straightforward, and he said the forum was precisely part of the efforts needed to address the challenges and bring out a transformational impact of PPPs.
Ms Yvonne Choi Ying-pik, Commissioner for Belt and Road, Hong Kong SAR Government, introduced the vision and mission of the Belt-Road initiative put forward by China’s President Xi Jinping and the importance of promoting people-first PPPs in Belt-Road countries.
Ms Sharanjit Leyl, a producer and presenter at BBC World News, moderated a high-level debate on how the international community could help China to operationalise its Belt-Road initiative and develop more people-first PPPs. 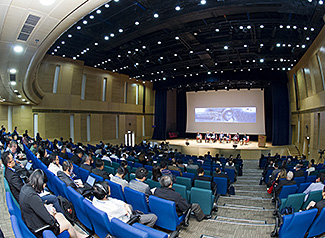 Experts from all over the world.
UNECE is one of five regional commissions at the UN. The International PPP Centre of Excellence supports “People-first PPPs” that are economically viable and have a transformational impact.
In addition, CityU’s College of Business co-organised and hosted another forum on the Belt-Road initiative on 8 May at CityU, looking closely at the benefits and risks in financial investment under the initiative, among other issues.
Other organisers of the event on 8 May were GOSS Institute of Research Management Limited; Risk Management Institute, National University of Singapore; and Eurasian System Science Research Association.