The sports teams from City University of Hong Kong (CityU) have further extended their dominance in intervarsity sports competitions by winning a record-breaking ninth Grand Slam in the 2016-2017 annual sports competitions. Thirteen local higher education institutions took part in this annual event, which is organised by The University Sports Federation of Hong Kong, China (USFHK). 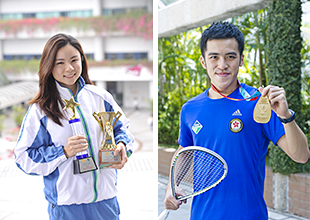 Chung Chui-ting, Sportswoman of the Year (left); and Yip Tsz-fung, Sportsman of the Year (right).
The Grand Slam refers to the men’s and women’s teams winning the overall championships in the same year after competing in 32 sports events. In addition, both the titles of the USFHK Sportsman and Sportswoman of the Year went to CityU students: Yip Tsz-fung, a business student at CityU and the world’s No. 32 squash player, and Chung Chui-ting, an applied social sciences student and the world’s No. 5 woodball player, respectively.
Among the 32 sports events, CityU teams won 12 championships, nine 1st runners-up and five 2nd runners-up. Moreover, 11 CityU athletes were among the 32 players named Most Valuable Player in their respective events. The USFHK annual prize presentation ceremony was held on 23 April.
Professor Way Kuo, University President, was the officiating guest at the ceremony. Mr Herman Hu Shao-ming, Council Chairman, and other CityU representatives attended the ceremony to show their support including Professor Horace Ip Ho-shing, Vice-President (Student Affairs), Professor Paul Lam Kwan-sing, Chief-of-Staff, Dr Ron Kwok Chi-wai, Dean of Students, and Dr Wong Chi-tim, Director of Student Development Services. 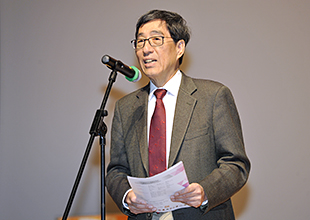 Professor Kuo, the officiating guest, gives the welcoming address at the ceremony.
In his address, Professor Kuo said he was delighted by the athletes’ achievements and that he was particularly excited about the outstanding performance by athletes representing Hong Kong in competitions.
“As the current President of USFHK, I would like to extend my congratulations to all winners and I hope that you will continue to shine in all competitions with your excellent sportsmanship,” he said.
Chung Chui-ting, who was surprised to be named Sportswoman of the Year, took up woodball after joining CityU.
“By winning the title, I hope that more people will know about woodball, and in turn boost the development of the sport,” she said, after thanking CityU for all its support.
As Yip Tsz-fung was out of town on the day of the presentation ceremony, he thanked the Federation and CityU via a pre-recorded message, saying that the award was recognition of his hard work over the years. 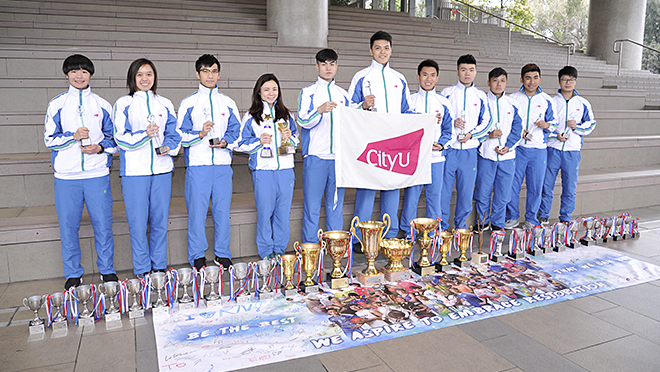 11 CityU athletes were named Most Valuable Player in their respective events.