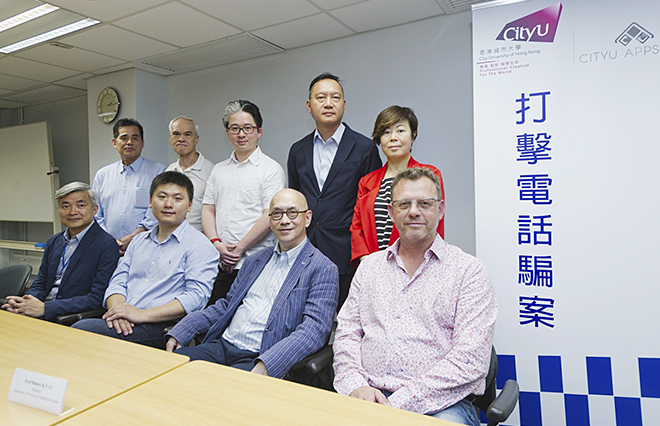 The cross-disciplinary team at CityU that has developed a mobile app to fight phone fraud. (1st row from left) Dr Kwok, Dr Cheung, Professor Li, Professor Walker, (2nd row from left) two trial users Mr Leung Chi-wah and Mr Chan Wai-man, Mr William Wu Man-hon, Administrator of HKJunkCall, Dr Wong, Dr Li.
A mobile app that can effectively protect users from falling victim to phone scams has been developed by a cross-disciplinary research team at City University of Hong Kong (CityU).
A prototype of the mobile app was developed at the invitation of the Hong Kong Police Force, and a pilot study showed the majority of participants found it helpful or feel safe with the app installed.
Hong Kong, mainland China and neighbouring regions have seen a rise in the number of phone deception reports in recent years. Often victims suffer a substantial loss, which can run up to millions of dollars in some cases. The CityU team undertook the project as a way to fight this pressing problem.
The app alerts users in the case of suspected incoming calls and raises their awareness of the risk of a scam. A warning message is prompted to alert the users when incoming fraud numbers are identified. The information is provided by HKJunkCall, a well-established company providing phone-screening apps.
The members of the CityU team contributing to the project are experts in their fields: Professor Richard Walker, Chair Professor in the Department of Public Policy; Dr Ron Kwok Chi-wai, Dean of Students; Professor Robert Li Kwok-yiu, Professor in the Department of Physics and Materials Science; Dr Ray Cheung Chak-chung, Associate Professor in the Department of Electronic Engineering and Director of the CityU Apps Lab; Dr Michael Wong Chak-sham, Associate Professor in the Department of Economics and Finance; and Dr Jessica Li Chi-mei, Assistant Professor in the Department of Applied Social Sciences. The project is supported by the CityU Apps Lab. 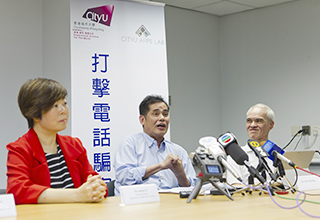 Two trial users say they feel safe with the app installed.
A pilot project using the mobile App led by Dr Li, an expert in the study of fraud in Hong Kong, was conducted between December 2016 and March 2017. The initial findings were encouraging. More than 70% of the trial participants found the mobile app helpful and would recommend it to others; and more than half said they feel safe from fraudsters with the app installed.
Dr Li said the participants in the trial study were mainly elderly people, retirees and university students, who are three major groups most vulnerable to phone deception.
“With promising results from the trial project, the CityU team is confident in pursuing a larger and more comprehensive project to help protect Hong Kong citizens against phone deception,” said Dr Li.
Established in 2013, the CityU Apps Lab offers multi-level coding workshops to allow students to learn about and explore the latest technologies and to extend code learning to the general public.
Dr Li’s project on financial fraud against the elderly in 2012 drew the interest and collaboration of the Hong Kong police in 2015, who had been looking for ways to combat fraud.
A series of research activities on combating fraud will be undertaken when more funding is secured.
​