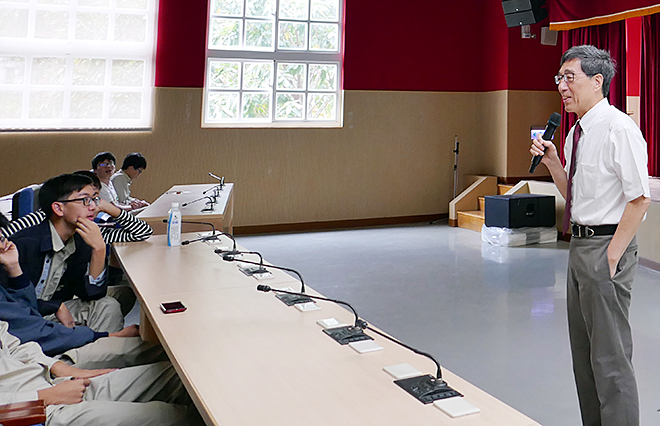 Professor Way Kuo, President of City University of Hong Kong (CityU), led a delegation to Taiwan in February to introduce the latest development of the University to secondary school principals and students and to media representatives. 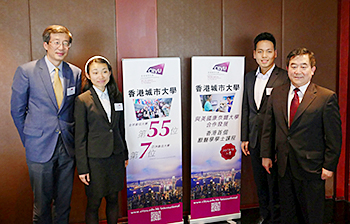 During the visit to Taipei Municipal Jianguo High School on 20 February, Professor Kuo talked to the students during a seminar titled “Where is Truth?”

Professor Kuo encouraged students in the audience to find out truth through critical thinking. He pointed out that many people emphasised the importance of academic performance. However, when we carefully study successful people in society, we find that outstanding academic performance does not automatically transfer to excellent achievements in work. This can also be seen from the fact that some Nobel laureates do not possess a PhD degree.

He also pointed out that many people thought that internationalisation simply meant acquiring good English language skills. However, many Chinese professors in the US are not proficient in English, but their academic achievements are internationally recognised. “Language skills are not the most important. What really matters is the logic and content behind our utterances,” Professor Kuo said. 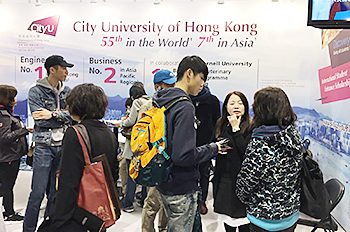 CityU joined an education expo in Taiwan where prospective students
were given on-the-spot interviews.

In the evening, the delegation had dinner with principals and counsellors from many secondary schools in Taipei, Taichung, Tainan and Kaohsiung. A reception was held the next day for representatives from Taiwan’s media. On both occasions, the delegation introduced CityU’s latest development, including its steady rise in international rankings and the launch of undergraduate programme in veterinary medicine this year.

At the above two activities, Mr Paul Chuang, a graduate from CityU’s College of Business, and Amy Wang, a Year 4 student in CityU’s School of Energy and Environment, shared their learning experience in CityU.

Mr Chuang said the thinking skills that he acquired at CityU had helped his future development, while Amy said that CityU’s industrial internship arrangement had offered her a better chance to join international environment consulting companies in the future.

In addition, CityU sought to attract outstanding students to come to study at CityU at the “2017 Universities and Technical & Vocational Schools Expo” held in Taiwan on 25 and 26 February. Around 1,500 students and parents visited CityU’s booth and about 80 students had interviews on the spot.