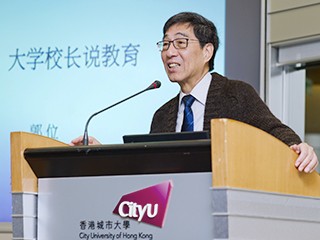 Professor Kuo shares his views on “soulware”.
Professor Way Kuo, President of City University of Hong Kong (CityU), discussed his idea of “soulware” with a delegation from the Zhejiang University (ZJU) Morningside Cultural China Scholars (MCCS) Programme on 16 February.
Sharing his thoughts in his book The Soulware within Higher Education published last year, Professor Kuo pointed out that “soulware” referred to a model of culture, mentality, behaviour and mindset.
In his speech, he quoted his poem, “Teaching is empty without devotion of the heart; Research after all remains the utmost art. Barely equipped with hardware and software; Still it lacks, devoid of proper soulware” (a translation from the original Chinese).
“Without devotion from the heart, a university contains nothing but hardware and software. Only with dedication to knowledge will a person be devoted to research,” he explained.
Many people in the mainland, Hong Kong and Taiwan over emphasised learning English, he said, as if studying English was the only way to promote internationalisation. 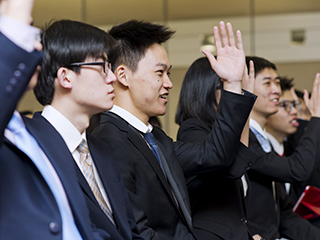 ZJU students interact with Professor Kuo during his talk.
However, he feels that language learning does not equal to internationalisation. The message and the content were much more important.
“We should not only learn English but also follow international practices. The objective of going overseas for an exchange is to understand the way people in other countries acquire knowledge,” he said.
He also indicated that academic results were not as important as a person’s mindset. Curiosity, studying hard and devotion to research led to success, he said.
The Zhejiang delegation comprised Professor Jiang Yuexiang of ZJU’s College of Economics and 31 students from the MCCS Programme. The students enthusiastically asked questions and discussed with Professor Kuo at the Q&A session.
The MCCS Programme aims to nurture future leaders who will uphold Chinese culture with an international vision. Outstanding students from various majors at ZJU are selected to join the programme. They attend training courses on topics such as Chinese and western classics, the economic history, world civilisation and international relations. Overseas visits and exchanges are also arranged.