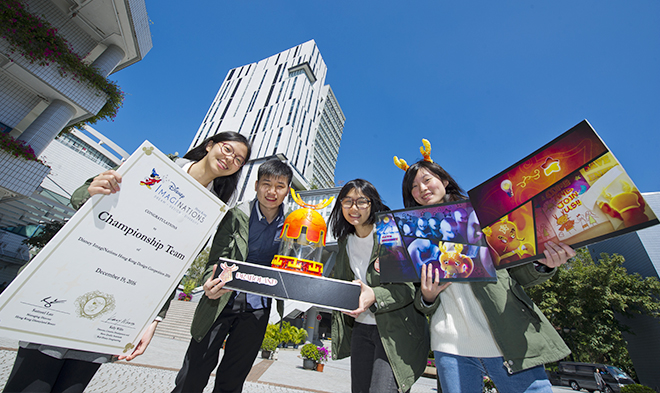 Four students from the School of Creative Media (SCM) and the Department of Electronic Engineering (EE) at City University of Hong Kong (CityU) have won the championship at Disney ImagiNations Hong Kong.

They were rewarded for their development of an interactive campus that encourages teachers and students to take part in creative activities.

Their prizes for outperforming 78 teams formed by 350 students from local tertiary education institutions in the competition last year included a trip to the Walt Disney Imagineering headquarters in California and summer internships at Hong Kong Disneyland.

The protagonist of their project Draboland is an imaginary animal called Drabo who collects creative ideas from campus and saves them as energy in the Bell of Harmony. The creative energy is converted into power that supplies the whole of campus. The aim of the project is to encourage people to save energy, be creative and bring happiness to society.

Cecile, who developed the story, said the idea for Drabo and the Bell of Harmony came respectively from the bronze statue of Pixiu (a Chinese mythical creature) and that of Bo (an ancient Chinese musical instrument) installed on the CityU campus. Both installations possess a strong CityU flavour enriched with Chinese culture.

“In Draboland, people need to draw pictures using touch screens located on the ground in order to collect creative energy. 3D stars appear in the Bell of Harmony when energy is saved. After a sufficient quantity of stars has been collected, Drabo holds a celebration for the Movement of Revival in the evening and displays the graphics created earlier by people around campus via the Light Shuttle,” she said.

To align with the Disney style, the winning team worked hard on story composition, graphic art and model design. They employed 3D printing and holographic technologies to create models for their story.

Albert applied the knowledge and technology that he had learned in class and turned his team’s wildly creative ideas into models. “We used 3D printing technology to produce the model for the Bell of Harmony. With a screen installed beneath the model, the 3D stars are displayed using holographic projection. Then, the Light Shuttle is produced using different lighting effects to turn energy into concrete objects that can be distributed everywhere on campus,” he said. 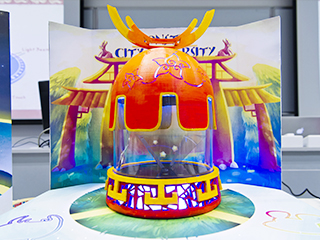 The students employed 3D printing and holographic technologies to create models for their story.

Their project was commended unanimously by the judges, who remarked that the team’s presentation was interesting and full of energy. Also, they praised the students’ innovative ideas of merging characters with Chinese culture. On the technological front, the team showed professional model-building skills with attractive graphics, the judges said.

Roxanne and Sally, who did the art work for the project, said they had used many colours for the story to express the hope of bringing more happiness to campus as well as the community.

To all four students, winning the award was an affirmation of their interdisciplinary achievements. The three SCM students admitted that the competition had greatly inspired their future plans. Albert said that he was glad to know more about Imagineering, another possible career choice outside the traditional engineering field.

The winning team was supported with the Student Contest Support Fund from CityU’s Office of Education Development and Gateway Education (EDGE). The fund aims to encourage students to identify projects from their studies within CityU’s Discovery-enriched Curriculum that might be suitable for competitions, and continue to discover and innovate.