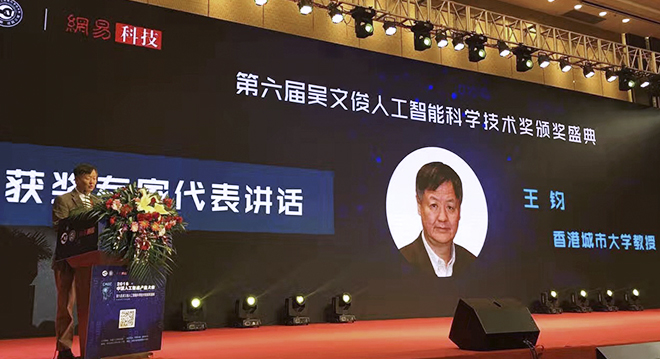 Professor Wang Jun, Chair Professor of Computational Intelligence in the Department of Computer Science at City University of Hong Kong (CityU), has received the 2016 Achievement Award at the Wu Wen Jun Artificial Intelligence Science and Technology Award Ceremony.
He won the award for his outstanding contributions in the advancement of neurodynamic optimisation research.
Now in its 6th year, the Achievement Award is the highest honour bestowed by the Chinese Association for Artificial Intelligence. The establishment of the Wu Wen Jun Science and Technology Award was approved by the Ministry of Science and Technology of China.
As an IEEE Fellow and the Editor-in-Chief of IEEE Transactions on Cybernetics, Professor Wang has conducted research on both the theory and applications of neural networks since the late 1980s.
Ideally, artificial neural systems are the counterpart to biological neural systems. If properly designed, the former can function as goal-seeking computational models for solving optimisation problems.
“Persistence is the key to successful research,” Professor Wang said. There have been a lot of ups and downs in this field throughout the history.
Artificial intelligence (AI) first emerged in the 1940s and became prominent in the 1960s before the hype subsided in the 1970s. It became a hot topic again in the 1990s, suffered a setback in the 2000s and recently recaptured the world’s attention. The inconsistent wave can translate to unstable funding and a shaky career path.
The past three decades have also witnessed the birth and growth of neurodynamic optimisation, with various globally convergent recurrent neural networks having been developed. However, almost all past results are concerned with convex optimisation problems. The nonconvexity posts a great challenge for global optimisation.
Almost all machine-learning problems require solving nonconvex optimisation.
Professor Wang approached the problem with newly developed neurodynamic models that aim to extend the results drawn for specific convex problems. He focused on analysing the models for global and multiple-objective optimisation. The new results can then be applied to data processing, intelligent control, and dynamic portfolio optimisation.
He is keen to extend the applications of neurodynamic model in science and engineering, including bringing neural networks to AI machines. For example, his team is currently developing autonomous underwater vehicles using robust model predictive control and intelligent control methodology.
The slow signal transmission in water poses substantial challenges to underwater driverless vehicles. Simply put, the machine needs to be a lot more intelligent in order to work alone.
Over the years, Professor Wang has received national and international science awards. In 2014, he won the prestigious IEEE Neural Networks Pioneer Award presented by the IEEE President-elect for his outstanding achievements on neurodynamic optimisation.
The Neural Networks Pioneer Award is considered the highest honour in the field of neural networks. Professor Wang is only the second Chinese person, after a Chinese American at UC – Berkeley, and the third person from Asia, after two Japanese professors at Tokyo University and Osaka University, to receive this honour.