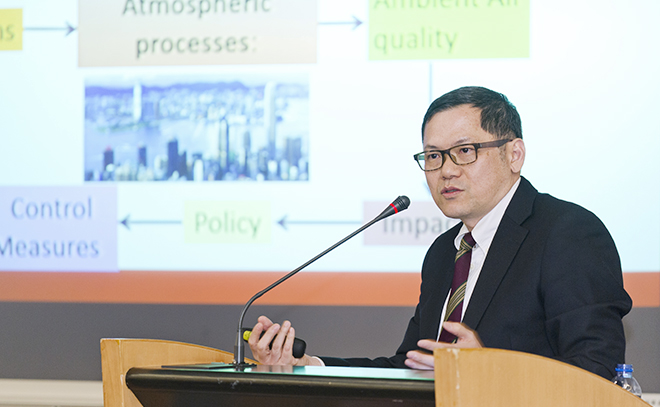 Professor Chan Chak-keung
Two surprising points about air pollution were raised by the speaker at the latest talk in the on-going President’s Lecture Series: Excellence in Academia at City University of Hong Kong on 25 January.
The first was that roadside eateries preparing roasted, barbeque, deep-fat or stir-fried dishes in densely populated local urban areas that also experience high volumes of traffic can create a significant amount of unpleasant matter that floats about in the air.
The second was that emissions such as those from vehicles are only a part of the air pollution problem: the chemical reactions that take place in the atmosphere are just as worrying.
The two points are related, according to the speaker, Professor Chan Chak-keung, Dean of the School of Energy and Environment and Chair Professor of Atmospheric Environment. His research reveals that potentially hazardous secondary organic particulate matter (PM) is formed in the ambient air around restaurants from the different kinds of oil used in cooking. In contrast, primary pollutants are vehicle emissions, for example.
“The atmosphere is a giant oxidative chemical reactor,” said Professor Chan, an air pollution expert who specialises in the sources and formation of PM in the atmosphere. Oxidative means promoting reactions and the formation of new secondary pollutants.
For example, the smoke from the cooking processes in Hong Kong diners creates what Professor Chan refers to as organic aerosols, i.e., microscopic particles that can cause a range of health problems if inhaled.
These aerosols are tiny. PM2.5, for instance, is a commonly used term nowadays for fine particles less than two and a half microns in diameter. These aerosols can be drawn deeply into the human body, potentially causing an array of lung diseases, some of which might well be life-threatening. To give a sense of how small a micron is, a human hair is usually over 50 microns thick.
In parts of Mongkok where Professor Chan conducted his research, the vapour from the cooking oil travels into the atmosphere outside the restaurants and reacts with other chemicals, to form aerosols.
It is a worry situation.
“Particulate matter air pollution poses severe health threats to millions of people around the world, degrading visibility in cities and adversely impacting the global climate,” Professor Chan said.
He noted that 1.3 million died in China as a result of air pollution, while the figure worldwide stood at 3.3 million, he said.
However, Professor Chan was relatively confident about the work that the governments in mainland China and Hong Kong were putting into tackling PM issues.
While it was not possible to shut down polluting facilities in cities such as Beijing for long, and so regularly witness the so-called “APEC blue”, i.e., the refreshingly clear skies that welcomed political leaders to the Asia-Pacific Economic Cooperation (APEC) meeting in the capital in November 2014, Professor Chan said resources were being poured into mitigating the problem.
Professor Chan trained as a chemical engineer and researches the interactions between PM and the atmosphere. He is the first scholar outside the US and Europe to be editor-in-chief of Atmospheric Environment in the journal’s 50-year history. He took up the position in 2008. According to the Shanghai Ranking's Global Ranking of Academic Subjects 2016 by Elsevier, he is one of the most cited researchers in the area of environmental science and engineering.
The President’s Lecture Series: Excellence in Academia, which has been running for over six years, enables CityU’s top academics to share their research with a wider campus audience.