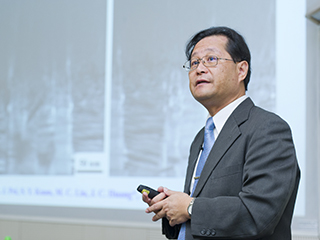 Professor Jacob C. Huang
In his lecture titled “Recent exploration on thin film or porous metallic glasses for MEMS and biomedical applications”, Professor Huang said laminated films with sharp/graded interfaces were commonly seen in semiconductor, optoelectronic or biomedical multilayered structures. These characteristics were compared with those of the monolithic nanocrystalline metal films or monolithic metallic glasses during the talk.
Porous metallic glasses can be used as an integrated micro-lens array. They increase the coupling efficiency of optical systems that in turn enhance the brightness of LCD backlighting and increase the efficiency of optical switches.
Professor Huang, who has acted as Vice-President at NSYSU and programme manager in the National Science Council, has been awarded the position of National Chair Professor in Taiwan, the highest honour in the academic field of engineering. 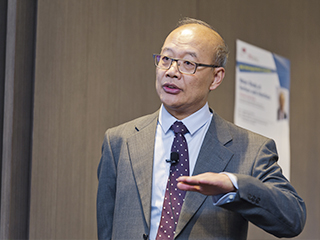 Professor Enge Wang
In the other IAS Distinguished lecture, titled “Water Study at Surface and Interface”, Professor Wang demonstrated the inside structure of a single water molecular and the directionality of H-bonds of water clusters in real space.
He said Schrodinger was the first person to realise that real material can be viewed as a poly-atomic system, which is an intermixture of two coupled subsystems, one nucleus and one electron.
He said nuclear quantum effects (NQEs) in the dynamic study of a real material system like water on salt were very important: the larger the order parameters, the more inhomogeneous the proton distribution.
Professor Wang also serves as University Chair Professor of Physics, Peking University. He is a member of the World Academy of Sciences and a fellow of the American Physical Society and the Institute of Physics (UK).