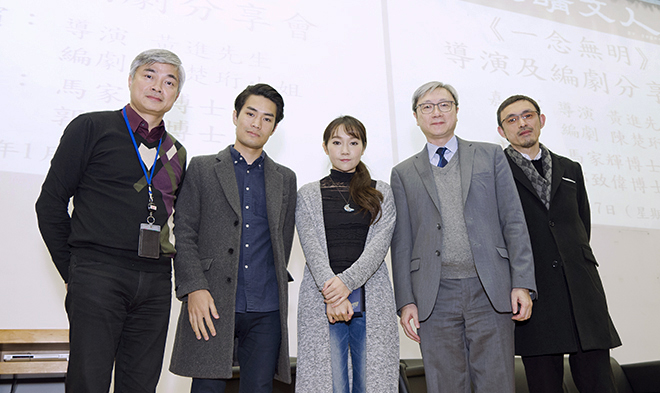 (From Left) Dr Kwok, Mr Wong, Miss Chan, Professor Ip and Dr Ma.
Two award-winning graduates from the School of Creative Media (SCM) at City University of Hong Kong (CityU) shared the experience of making the movie Mad World at a special talk on 17 January 2017. Mr Wong Chun won the Best New Director award in the 53rd Taipei Golden Horse Awards and Best Director at the 23rd Hong Kong Film Critics Society Awards. Miss Florence Chan Chor-hang won Best Screenplay at the latter event, and the movie was also selected as one of the six Films of Merit by the Society.
More than 200 people attended the event, which was titled “Talk by the Director and Screenwriter of the Film Mad World” and was part of the CityU Humanity Talk Series organised by the Office of Vice-President (Student Affairs). The CityU talk was hosted by Dr Ma Ka-fai, Assistant Professor in the Department of Chinese and History, and Dr Ron Kwok Chi-wai, Dean of Students.
Professor Horace Ip Ho-shing, Vice-President (Student Affairs), Dr Wong Chi-tim, Director of Student Development Services, and Mr Wilson Lam Kin, Director of Student Residence Office, attended the event.
While agreeing that winning the awards had taken them by surprise, the two alumni thanked SCM for the education it offered, particularly the teaching of Mr Patrick Tam Ka-ming, former Associate Professor of SCM. He had inspired them to pursue careers in the film industry, they said.
Mr Wong felt that he was fortunate to have had the opportunity to direct the film, get funding from the Hong Kong SAR government and have the support of the actors and crew members.
“During the production of the film, I met a lot of difficulties such as the pressure to work with veteran actors. However, I came to realise later that the most important thing was to communicate well with all parties and work together to produce a good film,” he said.
Miss Chan said that her script was inspired by a local news report. Hoping to arouse interest among the general public in reflecting on the meaning of life, she submitted her script to the First Feature Film Initiative.
When asked at the talk about her future plans, she said, “I enjoy writing and wish to continue my work as a screenwriter.”
During the highly interactive Q&A session Mr Wong advised fellow students to study hard and uphold the principle of righteousness with a critical mind. Meanwhile, Miss Chan said that it was important to preserve one’s original objective, and she encouraged students to identify what they really want to do, adhere to it and wait for the opportunity to make it come true.
Launched in 2014, the CityU Humanity Talk Series aims to broaden the horizons of students and enhance their personal development by inviting leaders from various sectors to share their keys to success. 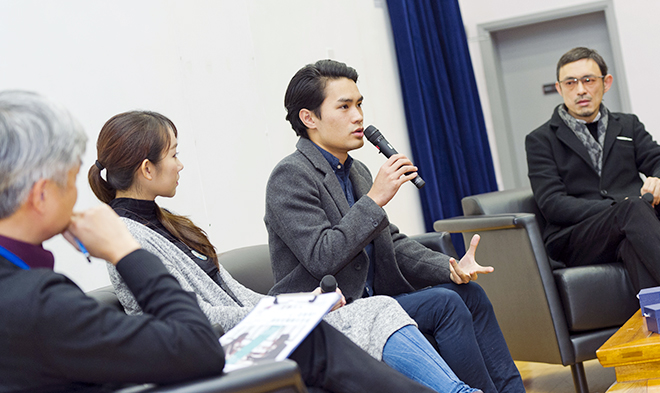