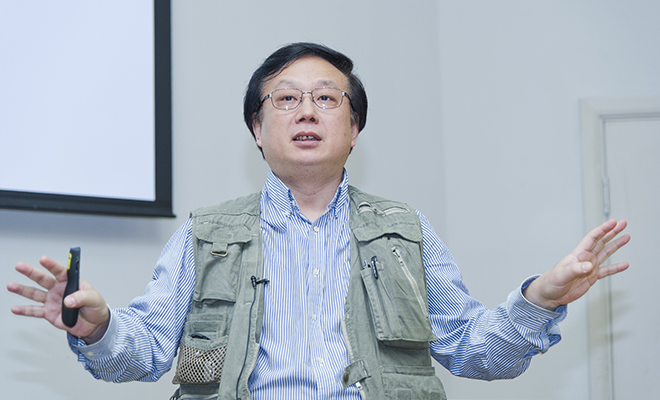 Nature has inspired scientists to develop artificial materials with smart super-wettability, according to a renowned physical chemist at City University of Hong Kong (CityU) on 13 January.
Cooperative effect of micro/ nano-structures and surface energy are the keys to super-wettability, said Professor Jiang Lei of the Technical Institute of Physics and Chemistry, Chinese Academy of Sciences.
The lecture was titled “Smart Interfacial Materials from Super-Wettability to Binary Cooperative Complementary Systems”.
Professor Jiang said the cooperative distance between a pair of complementary properties must be comparable with the scale of the related physical or chemical parameters.
He said the smart super-wettability system had great applications in various fields such as self-cleaning glasses, water/oil separation, anti-biofouling interfaces and water collection systems.
Professor Jiang became the Dean of School of Chemistry and Environment at Beihang University in 2008. He was elected as members of the Chinese Academy of Sciences and the World Academy of Sciences in 2009 and 2012, respectively. He was elected as a foreign member of the US National Academy of Engineering in 2016.