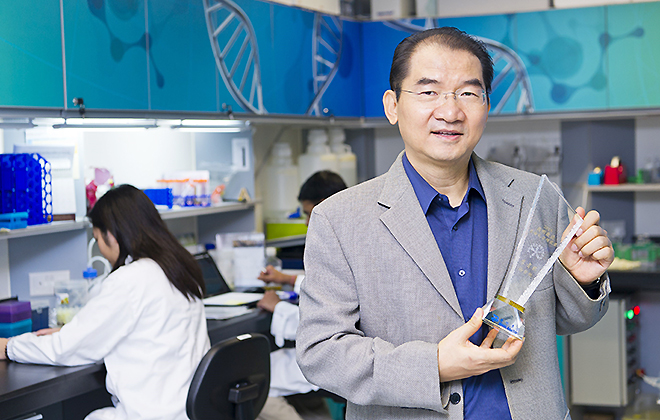 Professor Michael Yang Mengsu, Yeung Kin Man Chair Professor of Biomedical Sciences and Head of the Department of Biomedical Sciences at City University of Hong Kong (CityU), won the 2016 WuXi PharmaTech Life Science and Chemistry Award for his outstanding contributions in the “Development and clinical applications and commercialisation of biochip technology for cellular and biomolecular analysis”.

Since joining CityU in 1994, Professor Yang has focused on research on biochip technology and nanotechnology for molecular diagnostics and drug development. He and his team have combined the power of microfabrication technology and molecular biology to develop biochips that can be used to analyse complex genetic networks and cell communication to provide better understanding of the functions of genes and cells in our body, and to generate precise and accurate information for early detection and diagnosis of diseases.

“As a scientist in Hong Kong, I am honoured to receive the WuXi PharmaTech Life Science and Chemistry Award, as it is one of the major awards of its kind in China that has significantly promoted life science and biomedical research and the development of the pharmaceutical and biotech industry over the past 10 years. Winning the award means recognition of our research achievements,” Professor Yang said.

Professor Yang is committed to converting his research projects into clinical applications. In 2004, he co-founded Genetel (Shenzhen), a subsidiary company of CityU Enterprises Limited, to develop DNA diagnostics for the early detection of cervical cancer. The products developed in the company, which was later acquired by a publicly listed company, were adopted by hundreds of hospitals in the mainland, benefiting millions of women.

In 2010, through the Bio-Incubator Programme of Hong Kong Science Parks, Professor Yang helped two doctoral students establish Prenetics, a company providing pharmacogenomics services to help doctors decide the best medication and dose for patients in order to avoid undesirable side effects. Its services have now been adopted by several insurance companies in Hong Kong.

“The ultimate goal of biomedical research is to contribute to the well-being of humans. I hope we can train more students with an entrepreneurial and innovative spirit and encourage them to take up the challenge of converting the University’s many high quality projects from basic research into commercial applications that benefit society,” Professor Yang said.

Professor Yang’s team recently focuses on studying the metastasis of cancer cells in different environments, and developing nanotechnology to eliminate them. “Our nanomedicine project involves designing externally activated multifunctional nanoparticles for targeted and combined thermotherapy and chemotherapy against cancer. Positive results were obtained for treatment on both primary and metastatic tumours in animal tests. Our next step is to advance the project to clinical applications,” he said.

Professor Yang has published more than 200 papers in international journals and has been granted 23 patents in China and the US. Professor Yang has earned various accolades, including the K. C. Wong Education Foundation Scholar Award, the Shenzhen Innovation and Technology Award, the Hong Kong Awards for Industries (Technological Achievement Grand Award), the Guangdong Science and Technology Award, and Second Class Award in the Natural Science category at the Higher Education Outstanding Scientific Research Output Awards from the Ministry of Education.

The WuXi PharmaTech Life Science and Chemistry Award, approved by the Ministry of Science and Technology in 2007, honours outstanding scientists for significant achievements in research and technology innovation, product development and commercialisation in the pharmaceutical and biotech industry in China.