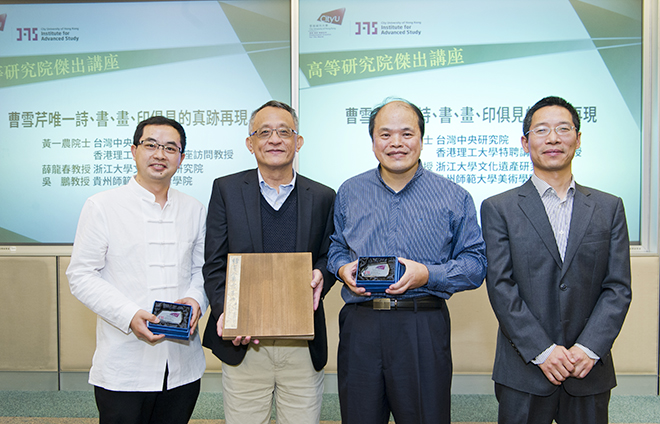 (From left) Professor Wu Peng, Professor Li Hsiao-ti, moderator of the lecture and Head of the Department of Chinese and History, CityU, Professor Huang Yi-long, and Professor Xue Longchun.

Three eminent scholars from the mainland and Taiwan jointly delivered a lecture titled “Rediscovery of an Authentic Artwork by Cao Xueqin: A Sole Piece of His Poetry, Calligraphy, Painting and Seal” for the Institute for Advanced Study (IAS) Distinguished Lecture Series at City University of Hong Kong (CityU) on 13 December.

The speakers were Professor Huang Yi-long, Academician of Taiwan’s Academia Sinica, Professor Xue Longchun from the Cultural Heritage Institute of Zhejiang University, and Professor Wu Peng from Guizhou Normal University. A high-resolution replicate of the newly rediscovered works of Cao Xueqin was shown at the lecture.

One of the Chinese classical novels, Dream of the Red Chamber, is highly popular among Chinese readers. However, little is known about the author, Cao Xueqin. His date of birth and death, native place of birth and other details of his life are still a mystery. None of his calligraphic works, paintings or seals has ever been discovered.

After rigorous research, the three scholars concluded that the Painting Album of Cao Zhan the Celery Farmer, a collection at the Guizhou Provincial Museum, is a genuine work by Cao Xueqin.

In the album, there are eight paintings with inscriptions beside each of them, including three inscriptions by Min Dazhang, one by Ming Daoren, two by Chen Benjing, one by Xie Zunzhe, and one by Cao Zhan.

In the lecture, the three professors discussed how they determined that the painter should be the author of Dream of the Red Chamber by comparing the choice of words, allusions, rhyme and poem style in the album with those in the novel.

In addition, they checked whether or not the lives of Min Dazhang, Chen Benjing and Cao Xueqin, the authors of inscriptions in the album, overlap.

Furthermore, they found some verses on one of the seals in the album that are closely related to the novel. Another seal revealed that the birth date of Cao Xueqin is probably the intercalary third lunar month of 1716.

The talk was well received by the audience who raised questions and discussed vigorously with the speakers. 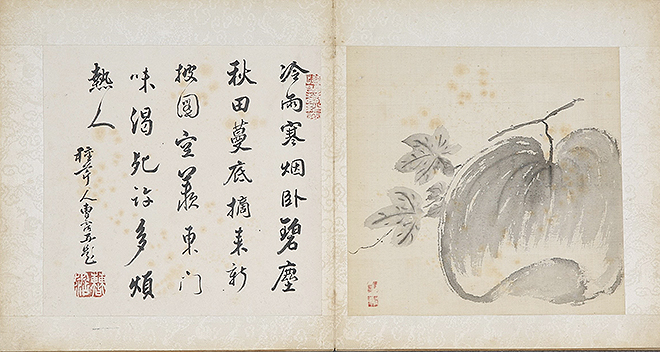 One of the eight paintings in the Painting Album of Cao Zhan the Celery Farmer.