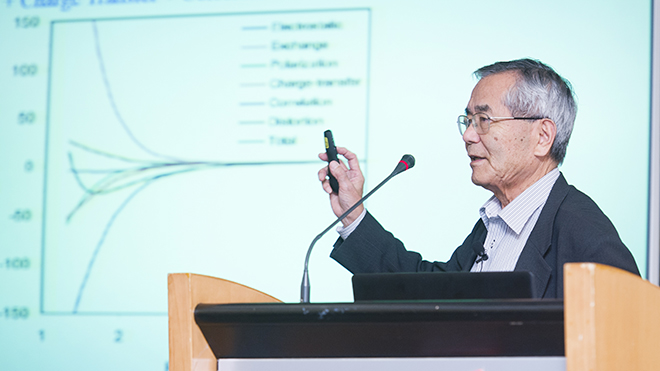 Professor Ei-ichi Negishi
​
A Nobel Laureate in chemistry delivered a distinguished lecture and met a group of students at an event held by the Institute for Advanced Study at City University of Hong Kong (CityU) on 1 Dec.
The lecture titled “Magical Power of d-Block Transition Metals- Past, Present and Future” was conducted by Professor Ei-ichi Negishi, the H.C. Brown Distinguished Professor of Chemistry at Purdue University.
Professor Negishi said the superb catalytic properties of d-block transition metals could be exploited in devising a wide variety of useful catalytic reactions for formation and cleavage of C-C, C-H, C-O and other bonds.
Reductive elimination, carbometalation, migratory insertion and olefin metathesis may be exploited for critically important C-C bond formation. He concluded that more novel catalytic one- and two-electron processes via organotransition metals will be discovered and developed.
IAS also organised the first “Meet a Nobel Laureate” session after the lecture for students to find out more about a Nobel Laureate.  During the session, Professor Negishi shared with about 20 CityU students his childhood memory of ice-skating in Changchun, China. He also recalled the moment when he was awakened to a phone call from Sweden which confirmed his Nobel Prize. He encouraged the students at the meeting to learn from failures and be passionate about life.
Professor Negishi began his study of transition metal-catalyzed organometallic reactions for organic synthesis in 1972. He has received various awards including the 2010 Nobel Prize in Chemistry and 2010 UK Royal Society of Chemistry Honorary Fellowship Award.

Professor Negishi interacts with the CityU students at the “Meet a Nobel Laureate” session.