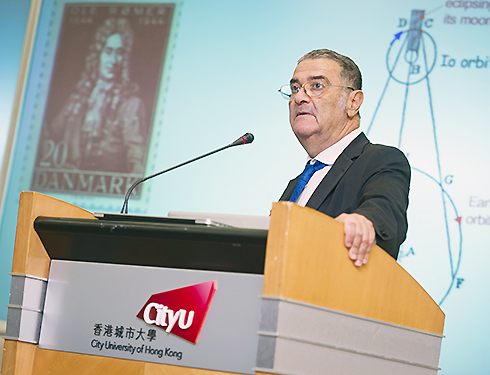 A​ Nobel Laureate in Physics discussed how fundamental questions about light have shaped our vision of nature at a distinguished lecture held by the Institute for Advanced Study (IAS) at City University of Hong Kong (CityU) on 26 October.

Professor Serge Haroche, Nobel Laureate in Physics 2012, Professor Emeritus at Collège de France and Senior Fellow of CityU IAS, gave a brief introduction of the efforts scientists had made to understand the nature and characteristics of light since the beginning of the Age of Enlightenment.

His lecture was titled “How questions about light have shaped our vision of the world and revolutionized our lives”.

The works of scientists, such as Galileo, Newton and Einstein, had deeply changed our vision of the world, from the microscopic scale of atomic and subatomic particles to that of the Universe at large, he said.

Their theories have led to practical applications in which light plays an essential role. Lasers, nuclear magnetic resonance imaging, atomic clocks and GPS are some of the devices based on the exploitation of visible or invisible light that has revolutionised our daily lives. The emergence of new quantum technologies in which light phenomena play an essential role promises to enhance our ability to measure, communicate and compute.