The shape of the planet 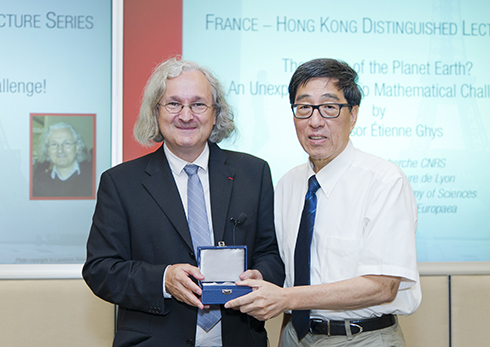 The mathematical question of determining the planet's shape is an essential one but the idea of bifurcation has become a crucial scientific concept, according to a renowned mathematician at City University of Hong Kong (CityU) on 5 October.

The lecture was titled “The Shape of the Planet Earth? An Unexpectedly Deep Mathematical Challenge!” It was the latest installment in the France-Hong Kong Distinguished Lecture Series.

Professor Ghys discussed the historical developments of purely mathematical theory on the issue. He used examples from Jacobi’s ellipsoidal Earth to Poincaré’s pear to illustrate the interaction between pure and applied sciences.

He argued that even though the greatest mathematicians had achieved many discoveries over the last 350 years, many important questions still remained open.

Professor Ghys is from École Normale Supérieure de Lyon, and is a Member of the French Academy of Sciences and Member of the Academia Europaea.