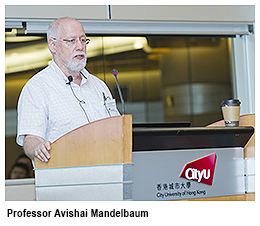 Professor Mandelbaum said that service systems constituted 60% to 80% of the western economy. “Queueing asymptotics” has grown to become a central research theme in Operations Research and Applied Probability, beyond just queuing theory.

He is a founder and the director of the Technion SEE Laboratory whose goal is automatic creation, in real time, of data-based models for service operations – analytical and simulation. Both will be universally accessible for applications. 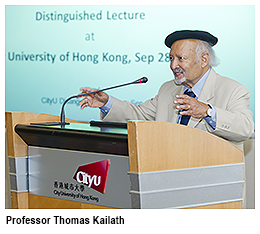 At the CityU Distinguished Lecture, Professor Kailath said engineering achievement was categorised into geniuses and revolutionary breakthroughs at his talk titled “The Process of Making Breakthroughs in Engineering”.

He said that while there was no magic formula for making breakthroughs in any field, they sometimes happen in the course of trying to solve a problem.

He concluded by quoting a US Inventor, Thomas A. Edison, “I have not failed. I have found 10,000 ways that do not work”.