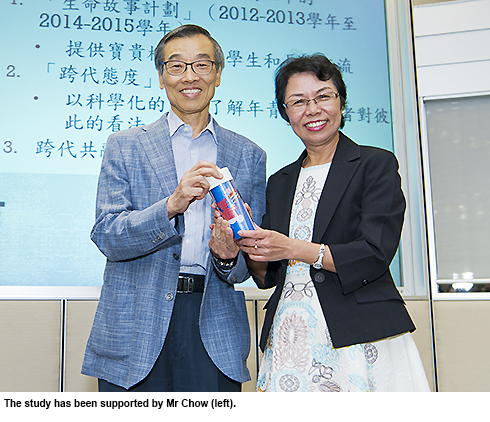 Young people will be more friendly to senior citizens if they know more about ageing, according to a cross-generation survey conducted by the Department of Applied Social Sciences at City University of Hong Kong (CityU).
Additionally, senior citizens seem to have a positive attitude towards younger people and would like to share their experiences with them, the survey results suggest.
The survey, titled “Perceptions across Generations: Fallacy and Truth”, has been funded by the Matching Grant Scheme of the University Grants Committee (UGC) and sponsored by Mr David Chow Tak-fung, founder and Managing Director of Easy Power Limited.
About 1,000 university students and 1,000 senior citizens were interviewed between September 2014 and April 2016. 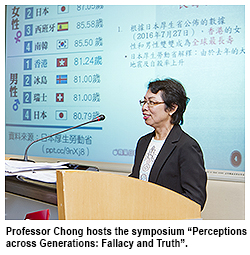 “The survey aims to find out what attitudes senior citizens and young people have towards each other, and understand and improve the relationship between the two generations,” said Professor Alice Chong Ming-lin, leader of the research project and Associate Head of the Department of Applied Social Sciences.
Over the years, the size of local families has shrunk and the nuclear family has become the major household composition. As a result, many young people in Hong Kong seldom interact with older members of the community.
At the same time, since July 2016, Hong Kong now has the highest life expectancy, and is ranked second in Asia in terms of the proportion of senior citizens aged 65 or above in its population, one place behind Japan.
Thus how to improve the relationship across generations has become a pressing social issue in Hong Kong.
According to the CityU survey, 82% of university students interviewed expressed a positive view about the elderly, while 77.6% of the elderly felt the same about young people. Nearly 80% of the older group were willing to share their experience and pass on their knowledge to the younger generation.
​However, it was found that 40% of university students believed that most elders had financial difficulties, lived unhappy lives and were unable to adapt to change. Such bias made them less willing to interact. 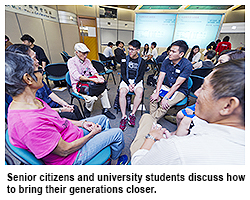 Also, according to the survey, females are more willing to have cross-generational interaction and communication. More female students hold a better impression of older people, and more elderly women (almost 10% higher than elderly men) had a positive attitude towards young people.
What majors students study at university has some relevance, according to the survey. Compared with business and science students, those studying social sciences and health studies appear to be more friendly towards senior citizens.
“Students who receive more information about the elderly in their academic programmes are more open-minded and have a more positive attitude,” Professor Chong said.
The survey results could encourage students and the community to reflect on attitudes and perceptions towards senior citizens; and inspire more inter-generational interaction which could contribute to greater inter-generational integration.
​