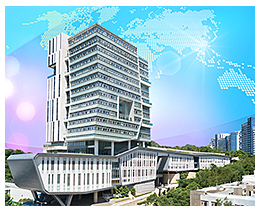 Recent achievements in global rankings highlight the strength of the research, faculty, students and programmes at City University of Hong Kong (CityU).

We have risen two places and are now ranked 55th in the world and 7th in Asia, while we have maintained our position as the 4th best university in the world under 50 years of age in 2016, according to Quacquarelli Symonds (QS). In fact, the QS Asia University Ranking has put CityU in 3rd place in Hong Kong.

In addition, we have jumped at least 82 places from last year to become 119th in this year’s Times Higher Education World University Rankings.

“As outlined in our Strategic Plan for 2015–20, CityU has vigorously implemented the Performance-based Pay Review Scheme and the integration of teaching and research. With the efforts of all faculty and staff, we have enhanced the quality of teaching and research, promoted innovation and strengthened the University’s academic capability in many facets,” said Professor Way Kuo, CityU President.

“Engineering is particularly strong,” said Professor Kuo, pointing out that CityU has been ranked 1st in Engineering in Hong Kong for eight years running, according to the 2015 Performance Ranking of Scientific Papers for World Universities by fields and subjects.