​
Thirty students from City University of Hong Kong (CityU) and a group of students from Lanzhou University undertook field studies and voluntary services on the Silk Road in Gansu province.
The programme was titled “CityU’s Omnibus Trip to Silk Road: Ethnic Community Services Programme” and it took place from 1 to 28 August. 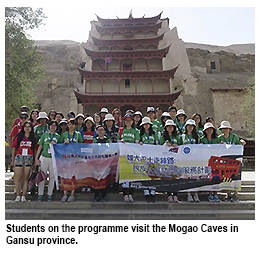 It was co-organised by CityU’s Global Services Office, Lanzhou University’s Hong Kong, Macao and Taiwan Affairs Office and School of Management, and the Culkor Committee for China Youth.
The students discovered a great deal about religion, culture and community development among the ethnic groups, and participated in voluntary services through activities such as field studies, lectures, workshops and social gatherings.
“We hope this new programme encourages students to broaden their visions and discover more about different ethnic groups. Most importantly, we hope participants reflect on their relationship with the world,” Professor Horace Ip Ho-shing, Vice-President (Student Affairs), said.
During the 28-day trip, CityU students visited ethnic minority groups such as Kazakhs, Mongols, Yugurs and Tibetans in areas including Aksai, Subei, Sunan and Lanzhou. 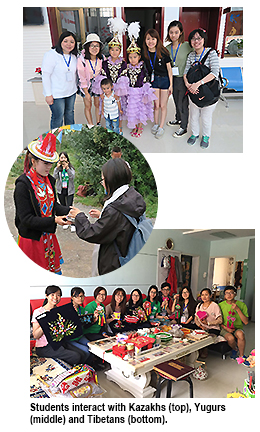 In their first stop in Aksai, they learned about the cultural origin and community development among Kazakh families. They watched singing, dancing and dombra (traditional Kazakh musical instrument) performances and tried local cuisines.
In the field study in Sunan, students learned first-hand about the importance of heritage conservation when they discovered that the culture and language of some minority groups are threatened by modernisation and globalisation.
When the trip had almost ended, students arranged parenting activities such as making handicrafts, painting, playing games and dancing for Muslim women and children in Luotuohang in Lanzhou.
All participating students agreed the trip had enhanced their understanding of the Silk Road.
“An intensive cultural exchange offered much deeper knowledge than reading 100 books. Through interactions with local people, I could feel the liveliness of the culture among ethnic minority groups,” Xie Lisi, one of the students, said.
CityU targets to have 65% of its undergraduates receive multi-cultural exposures outside Hong Kong as a way to broaden their horizons.