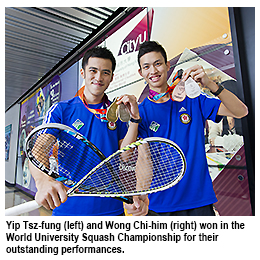 Yip Tsz-fung, a Bachelor of Business Administration student, was the tournament’s top-seeded men’s player, and he beat his opponent, Malaysia’s Ivan Yuen, 11-3, 11-9, 11-4 in the final to take home the title. He said that before the game he tried to relax as much as possible, so he could have his best performance at the game.

He said, “Every game brings different experience and rewards. In previous WUSC I have played with some opponents multiple times, so I know their strengths before the games. I try to remind myself to do my best and avoid making any mistakes.”

Wong Chi-him, also a Bachelor of Business Administration student, won the bronze medal after losing out to Tsz-fung 11-2, 8-11, 11-5, 11-7 in a hard-fought semi-final. He said the most memorable game this year in WUSC was the quarter-finals. He had a rough start and lost the first two rounds, but managed to win the next three and gained a spot at the semi-finals. He said, “Before the tournament, I gave myself pressure because I wanted to be on the awards stage.”

They have trained as athletes since secondary school, joining the Hong Kong Sports Institute (HKSI). After that, they enrolled in CityU through the “Student Athlete Admission Scheme”, and stayed in student halls to facilitate their training. 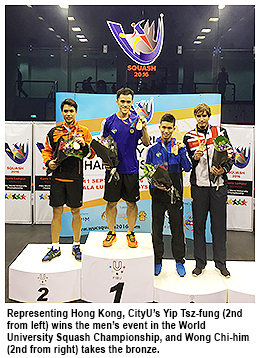 Both of them are members of the Hong Kong squash team and have 10 trainings per week at HKSI. Yip said in between intensive trainings and overseas tournaments, they have to manage their studies as well. Before school starts, teachers discuss with them arrangements for the semester to try and accommodate their training and competitions. If during the exam period they have to compete overseas, CityU arranges make-up exams.

They both plan to become full-time athletes and see the Asian Games in two years as a target, hoping to achieve good results there.

“We are very proud that CityU students have contributed to the best result ever for Hong Kong in the World University Squash Championships,” said Professor Horace Ip Ho-shing, who in addition to being the Vice-President (Student Affairs) at CityU is the Honorary Manager of the CityU squash team.

“It is also an excellent reflection of the high standard of sports that CityU has achieved over the years,” he added.

Sporting success is very much a part of the CityU character, according to Mrs Dorothy Davies, Associate Director of Student Development Services (Physical Education) and the Chair of the University Games Committee of the USFHK.

“The squash results symbolise the team spirit found on campus, and I congratulate the winners and all the CityU sports teams for their outstanding achievements,” she said.