Freshmen kicked off their university life at a welcoming ceremony on 23 August at City University of Hong Kong (CityU).

Attending were members of the CityU senior management team, including Professor Way Kuo, University President, who, after warmly welcoming the newcomers, offered four tips for success: be sincere, be honest, be smart and be capable.

The University Welcoming Ceremony showcased the University’s developments, achievements and student life through talks and video clips. About 800 students attended the event.

In his opening remarks, Professor Kuo told freshmen a story about the importance of overseas exchange.

“A husband caught a fish and asked his wife to cook it. He then said he wanted to go watch a movie. His wife wanted to go, too, but the husband said he would see the movie by himself while she cooked the fish, and then he would tell her all about it when he got back. When he came back home, he asked his wife whether the fish was ready. His wife replied that she had cooked and even eaten the fish, and she would now tell the man all about it,” Professor Kuo said.

Experience was everything, Professor Kuo said, and merely listening to the experience of others was not enough. Professor Kuo also reminded the freshmen that the friends they made at CityU would be a life-long influence.

In his address, Professor Gary Feng Gang, Acting Provost, introduced CityU’s unique Discovery-enriched Curriculum, the Gateway Education courses, CityU’s top-notch learning facilities and platforms, including the Apps Lab and the Innovation Commons, and our ranking in QS as well. 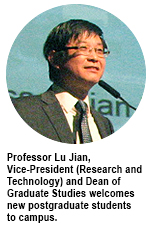 The two seniors talked about their learning experiences at CityU, too, such as exchange and internship programmes. They encouraged the new students to grasp every opportunity in the coming years and to learn as much as they could.

Postgraduate students are also being welcomed to their new place of learning. The Taught Postgraduate Student Orientation took place on 27 August while the one for research degree students will be held on 21 September. Both orientations are organised by the Chow Yei Ching School of Graduate Studies.